About Tanka Thumri and KHA
In Conversation with Kala Ramesh 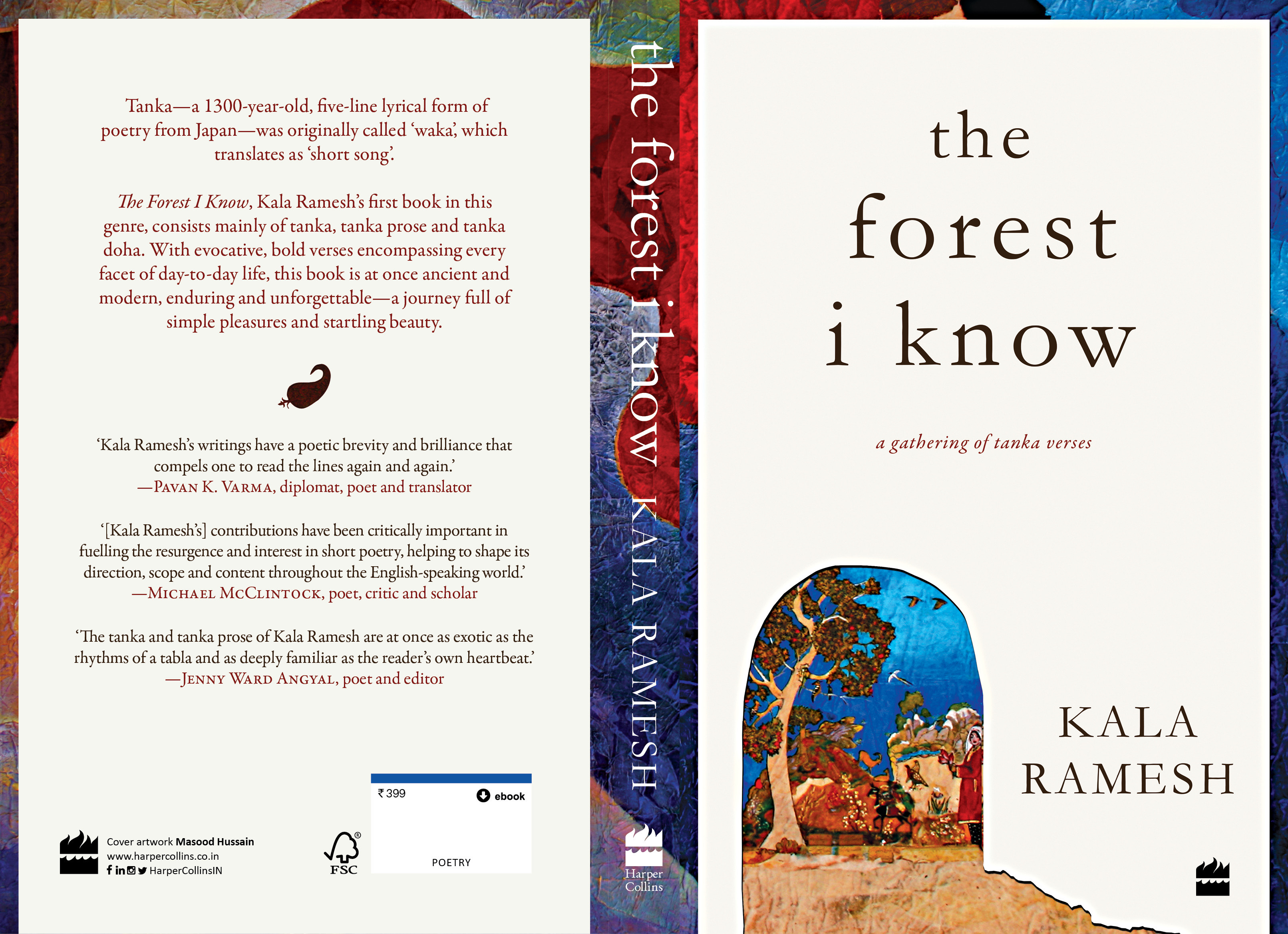 The Forest I Know is Kala Ramesh’s in the genre of the Tanka. The poems here are crafted as Tanka, Tanka prose and Tanka Doha. With evocative, bold verses encompassing every facet of day to day life, this book is at once ancient and contemporary - a journey full of simple pleasures and startling beauty.

1. Your latest collection The Forest I Know rests in the relatively new genre of tanka and tanka prose amidst contemporary poetry books. Yet we understand that this is an ancient form of lyrical poetry from Japan. Take us through how you arrived at a full-length collection in this category. Your book also contains tanka doha- is that your own innovation? Tell us more.

Thank you for inviting me to Usawa Review, Vinita. I’m deeply honoured.

Tanka is not new even outside Japan – most of the haikai poets who appreciate the intricacies of haiku can and do appreciate tanka. This book is 15 years of my published poems. I’m not very much in favour of self-published, vanity publication or the Indie books, so I had no other option but to wait until a publisher came along and getting HarperCollins India was the icing on the cake!

Tanka, a 1300-year-old five-line lyrical form of poetry from Japan, was originally called ‘waka’, which translates as ‘short song’. In comparison, haiku is only 400 years old! One thing that surprised and intrigued me was the practise then prevalent in Japan — haiku poets didn’t write tanka and tanka poets didn’t write haiku. To me this seemed like a self-imposed restriction, since from the beginning I had attempted haiku, senryu, tanka, haibun and renku. Even after so many years I’m still foxed why the Japanese did what they did.

I read that the well-known Japanese tanka poet, Machi Tawara, believes that nearly all tanka are written in the first person, and that tanka can convey only the ‘middle’ of a story. Probing still further into this ancient art form, I came to know that ‘yugen’, an aesthetic nuance meaning elegance, beauty and mysterious grace, is used extensively in tanka. These three factors made tanka my poetic form of choice for this book, the forest I know. I think the following tanka has ‘yugen’.

an evening
of tangled thoughts …
through branches
even this rugged moon
looks tattered at the edges        (p. 106)

A diary noting, as Stanford Goldstein calls them!

About tanka doha: Kabir, a 15th-century Indian mystic-poet-saint, is famous for his dohe – couplets of 24 sound units. Ignoring the sound units, I found that I could pair tanka together to tell a story. We have tanka sequences, but there is something special about twin tanka that say so much in a short span of 10 lines. For me, the link and shift that happens in the white space between the two tanka is sheer magic. I’m happy that tanka doha is gaining acceptance.

2. In terms of content, the book is rife with a vision for a better tomorrow. It takes a compassionate view of the human condition and how we are constantly battling against odds for a better future. What is the process like, of drawing parallels between nature and life that we as humans endure?

Quoting a WhatsApp message that I love for its stark beauty.
be like a tree:
stay grounded, connect to your roots, bend before you break and most importantly

— Anonymous
And added to this would be my favourite mantra – faith in one’s innate ability to bounce back.

Being a motherless child, my father often repeated ‘life is not a bed of roses’, and surely everyone alive will know it is not one. Does that mean we remain mired self-pity and wallow in it?

falling apples —
the branch sweeps into
a new balance

I came across this haiku in the initial years after entering the haikai world and it has stayed with me ever since. It’s been a solace through my trying moments and I have learned to ‘sweep into a new balance’ the way the branch does. I never fail to discuss this poem in all the workshops and haikai and tanka courses I teach.

“Art should comfort the disturbed and disturb the comfortable”
— Banksy

I feel my book does this.

3. There are several tanka and tanka prose in your book that have a unique Indian flavour- thumri, chand, azadi, yoga, the sound of KHA and many more. Would you say that the poetry in this book despite being deeply rooted in the Indian ethos strives to strike a universal chord with its readers globally?

I think the beauty of haikai and tanka is that they have the power of transportability, as Haruo Shirane calls it.

First and foremost, tanka, like haikai, are written mostly from personal experiences … and each poet and each country is immersed in their own cultural milieu. India, once a sleeping giant, has woken up! Our haiku, senryu, haibun and tanka are steeped in Indianness. Isn’t this in itself thought-provoking? Haikai and tanka are experiential poems – that is the basic ground rule that is established when you read these short-form poetries.

alone at home
sipping fresh-brewed coffee
I seek
an adult understanding
of Sita in the Ramayana        (p. 33)

Here is a tanka-prose from my book:

Being the third daughter, I was still ignorant about menstruation. Not surprising in that age and time. I remember the day — it was our summer vacation, and I had just turned twelve. My sisters and I were playing a game of carom.

a sudden spurt
of warm feeling …
my blood
from a womb
I knew nothing about
My mother said we’ll keep it a secret from the older members of the family, or else I’d be forced to wear a half-sari to hide from the world my becoming a woman.
(p. 54)

No longer can Japan claim haikai and tanka to be theirs exclusively! These arts are practised all over the world in different ways and in different colours. In both the Hindu and Buddhist scriptures, the image of “Indra's net” is used to describe the interconnectedness of the universe. This naturally leads me to this beautiful concept called the web of life.

Ever-changing and transient, still the lives we lead are interconnected. Life is not about building walls but about dissolving them … it’s not about pity, which divides and creates hierarchy but about compassion which is inclusive and expansive in nature; and empathy is a part of its essence.

4. The tanka are delightfully aphoristic. Was that a fallout of your long and successful association with writing haiku? Was it challenging to consistently bring a meaning and a metaphor to leaves, rivers, moons, trees et al?

I would like to clear up the myth that all Japanese short-form of poetry must be nature-based. Haiku is a seasons poetry. Its close sister – senryu – portrays the characteristics of human beings and psychology of the human mind. Tanka is much more open, and yet it has a distinctive flavour—not every five-line poem is a tanka.

5. How do you see tanka, haiku and haibun evolving on the canvas of poetry, especially in India? Would you say that such forms demand more from the poet as compared to someone who writes in free verse?

I feel India has woken up to Japanese short-form poetry in a positive way. Although it may never be as popular as mainstream poetry, haikai will soon find its place in India, just as art movies and parallel cinema will always have a niche in the world of Bollywood.

I’ve seen young people’s eagerness to learn more about haikai when they were exposed to it. What’s exciting is to see them respond to their own cultural experiences through this art form. On that Saturday morning when I saw most of my undergraduates reach the foothills of Bhamburda forest for their ginko (nature) walk, I was deeply moved. The next day, their professor said she couldn’t believe haikai and a nature walk could pull her students out of bed at 6 am.

To the second part of your question: Would you say that such forms demand more from the poet as compared to someone who writes in free verse?

No two arts can or should be compared. Each art form, when it’s well expressed, stands unparalleled! Having said that, I personally resonate better with haikai lit than with free verse. That’s my own predilection, though!

6. What, in essence, would you like the reader to take away from your book?

Nothing more than a quote from Oscar Wilde:
Be yourself; everyone else is already taken.

Vinita Agrawal Author of four books of poetry, - Two Full Moons (Bombaykala Books), Words Not Spoken (Brown Critique), The Longest Pleasure (Finishing Line Press) and The Silk Of Hunger (AuthorsPress), Vinita is an award winning poet, editor, translator and curator. Joint Recipient of the Rabindranath Tagore Literary Prize 2018 and winner of the Gayatri GaMarsh Memorial Award for Literary Excellence, USA, 2015. She is Poetry Editor with Usawa Literary Review. Her work has been widely published and anthologised. Her poem won a prize for the Moon Anthology on the Moon by TallGrass Writers Guild, Chicago 2017. More recently her poem won a special mention in the Hawker Prize for best South Asian poetry. She has contributed a monthly column on Asian Poets on the literary blog of the Hamline university, Saint Paul, USA in 2016-17. In September 2020, she edited an anthology on climate change titled Open Your Eyes (pub. Hawakal). She judged the RLFPA poetry contest (International Prize) in 2016 and co judged the Asian Cha’s poetry contest on The Other Side ‘ in 2015. She is on the Advisory Board of the Tagore Literary Prize. She has curated literary events for PEN Mumbai. She can be reached at www.vinitawords.com. Write to her at vinita@usawa.in

Kala Ramesh comes from an artistic and culturally rich South Indian Tamil family and believes, as her father was fond of saying that “the soil needs to be fertile for the plant to bloom”. She also feels that she owes her poetic streak to her mother.