no, my lord, no, don’t put me to this test
life seeks to flow away from me
the tiger has the deer’s child
in his teeth so is my state
even in the three worlds
there is no place for me save at your feet
hurry, mother Vithabai, hurry
I lose hope, I grieve
shelter Kanhopatra within your heart*
there at his feet
as Chandrabhaga is witness
you became a tree

as river Ujh is witness
as Chandrabhaga is witness

Sant Kanhopatra was a 15th century bhakti poet in the Varkari tradition. She was the daughter of a rich prostitute or courtesan called Shama (or Shyama) in the town of Mangalwedha (near Pandharpur) and was trained early in song and dance in order to follow her mother’s profession. She grew to be very beautiful and Shama urged her to perform before the Badshah but she refused. When the pressure mounted on her to enter the profession which she abhorred, she fled to Pandharpur and took refuge at Vitthal’s feet. She remained there, ‘wedded’ herself to Vithoba and, living the life of an ascetic, sang and danced only before him at the temple which she cleaned herself twice a day. Her fame spread as she composed and sang ovis and abhangs in Vitthal’s praise. Word of her beauty and her song reached the Bahamani ruler’s ear and he sent gifts for her inviting her to be his concubine. When she refused the Badshah sent soldiers to bring her by force. She asked to be allowed to meet Vitthal one last time and went into the temple. She is said to have sung the abhang translated above in this poem and that was her last composition. As the soldiers grew impatient it was found that Kanhopatra was no more and in her place grew a tarati tree which stands there still and is worshipped by devotees. In other accounts, the Chandrabhaga river that flows through Pandharpur broke its banks, flooded the temple and Kanhopatra’s body was found downstream on a rock. She was buried inside the gates of the Vithoba temple and hers is the only mausoleum (or samadhi) to a Varkari saint that exists within the compound of the temple. Kanhopatra is also the only woman Sant poet in the Varkari tradition who was accepted as a Sant but did not have any male Sant as guru. 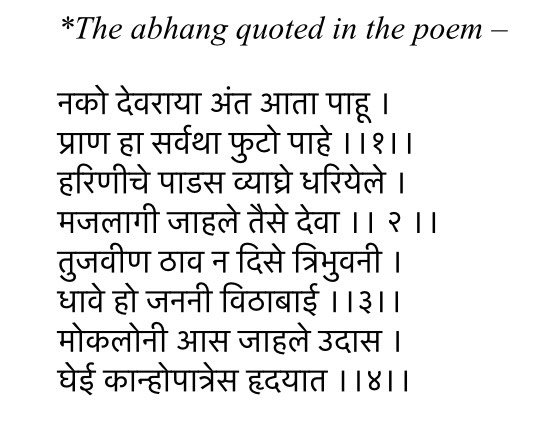 Anjali Purohit is a painter, writer, poet, translator and curator. She is the author of two books, Ragi Ragini: Chronicles from Aji’s Kitchen (Yoda Press, 2012) and Go Talk to the River: the Ovis of Bahinabai Choudhari (Yoda Press, 2019). She is the founder and curator of The Cappuccino Adda (formerly, Cappuccino Readings), an initiative working to foster a literary café culture in Mumbai and to contribute in building a vibrant writers’ community. She can be found at anjaliwrites.com--