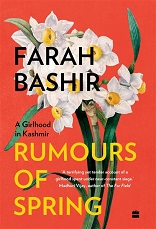 A girl visits a salon for the first time, a rite of passage for any ordinary teenage girl. But by the time she comes out of the salon, her world has changed, turned on its head; all with an hour. After this, all the quotidian details of her life will be a juxtaposition with as things were before that hour.

Farah Bashir’s debut book, Rumours of Spring, published this year by Fourth Estate, an imprint of Harper Collins, chronicles the years from 1989 to 1994 in Kashmir. This period was marked by the emergence of numerous militant groups, stifling crackdowns by the security forces, and unimaginable losses faced by the helpless Kashmiris, caught between the two. The book does not promise the reader a resolution but it closes on a note of hope; sometime the promise of a spring is the survivor’s last resort.

The book has been applauded for bringing a feminist perspective into the rhetorical narratives surrounding the Kashmir issue. The book does more. Bashir brings an honesty that is bound to appeal to the humane in every reader, evoke stark images of what it really means to be reduced to statistics, and to have no agency over your day, your life and its end. What it means to be thrown out of routine into extraordinary within an hour? What happens to ideas of ordinariness under conflict? Who decides one’s ordinary, when one loses the path to go back to how things were?

Whether it is the ruthless depiction of suffering through menstrual pain at night because even moving on creaking wooden stairs to get painkillers would mean a certain death under the night curfew or whether it is the end of a teenage love story because the authorities are not interested in rebuilding a burnt post office, Bashir humanises the faces behind a story of terror. The ordinary, mundane or even the cliched are elevated to a privilege, and denied to those frozen in time behind zones of conflict.

What is denied is heightened by what is assigned to the Kashmiris. Bashir has managed to share a glimpse into the emotional and psychological repercussions of living under a constant siege. After the defining incident of 1989, when the author was on the brink of adolescence, she develops a painful coping mechanism to deal with the pervasive anxiety. She would pull chunks of hair from her scalp, hoping the pain would numb her out. She also speaks of people suffering from Post Traumatic Stress Disorder, and suggests that in Kashmir PTSD should be renamed as Perennially Traumatic Stress Disorder. Innocent humour in the book is a veil for deeper malaise.

A child’s dreamscape early in the book gives the reader a peek into the experience of suddenly vanishing Kashmiri Pandits. They are not mentioned as a gesture of tokenism in Bashir’s narrative but acknowledged as threads that began wearing out of her childhood fabric, leaving her befuddled. Surreal elements surrounding dreams, prayers, hymns, djinns, and benign spirits are attempts to reclaim an identity that is slowly disintegrating under the loud marches of the troops outside her window. The significance attached to childhood experiences of a normal human are warped by the political situation where it is difficult to question anyone when your carrom partner goes missing overnight. Or you wake up not knowing whether your childhood is still intact, your teachers and classmates still alive.

When patrol bunkers become landmarks, replacing the routines of your locale, you lose one more aspect of normalcy. The narrator’s grandmother, Bobeh, innocently asks what is ‘Ben-kar’, and she is told it means a curse.

She is the pivot holding all the layered narratives in the memoir together. The book is structured around her death one December afternoon in 1994, and as the family prepares for her funeral the next day, the author weaves the narrative back and forth recalling details of life from before and after 1989. Though it makes the narrative pattern predictable, the authenticity that Bashir brings is so endearing that it elevates the need for any embellishments to the text

Koshur flows freely as a vein through English, and manages to a bring a language of fear into the telling. Bashir’s achievement also lies in preserving the syncretism of Kashmir’s social history while being true to the specifics of the life of a teenage girl, with fear dripping into every experience. As we learn about the Kashmiri rituals and customs surrounding celebrations and losses, we realise that the story is also an attempt at reclamation; that when a culture is threatened, it means losing a part of your identity forever.

This loss of self is dual-edged for women under violence, the one outside where girls are exposed to the gaze of the lecherous troops, and inside where emasculated male egos seek redemption in monstrous ways. The helplessness and lack of agency amidst her gender is heightened by the political turmoil. The narrator’s initial hope of finding an escape through education, the accepted route for majority of aspirational Indians, is disillusioned as exams are repeatedly postponed and she loses the zeal to study. She writes…

Unsure of the outcome and the uncertainty that prevailed around the siege, I had lost the resolve to do well in my exams. What was the point? People were struggling to stay alive. How did my distinction matter?

She goes on to write…

I didn’t know then, but it was the beginning of an apathy for my own self that would last for a long time. Our lives were controlled from elsewhere and the dreams that we dreamt were always at the mercy of someone else, someone occupying us, ruling is.

Life is reduced to a labyrinth of compromises, and it feels apposite that a woman should help us see beyond the polarities and political rhetoric surrounding the conflict in Kashmir. Bashir manages to evoke questions around every mundane detail of life, and how conflict can throw daily life into a perennial juggernaut.

After reading the book, the dusk colours different for me. I am safe, but my mind turns to Kashmir where dusk still means fear, uncertainty, death-like silence if you want to wake up alive every morning. And it also reminds me of other places on earth that have turned hell, and the women and children there. Those who have been thrown out of their lives into nightmares. Those who wait with rumoured hope.

Kinjal Sethia is a freelance writer-editor based in Pune. Her work has appeared in the nether Quarterly, Borderless Journal, EKL Review, Samyukta Fiction and elsewhere. She is the fiction editor at The Bombay Literary Magazine. She is also a part of the writing collectives The Quarantine Train and Pune Writers’ Group.