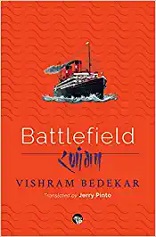 Context to the Book

During the release event for the translation of Ranaangan, Shanta Gokhale talked in detail about what makes Ranaangan a classic. She mentions that Bedekar wrote ‘Ranaangan’ as an intense rush of emotions in response to and a commentary on the politics of the times.

Bedekar had travelled from Europe to Bombay by sea, as WW II loomed. The deck of his ship was a microcosm of the world waging war out there, and the attitudes and opinions that lashed about around Bedekar created a powerful turmoil in him. Once back home, he penned the work in just a month, in August 1939, and published it anonymously in the same month. Bedekar was a film maker and not interested in making a name as a novelist. He was also not interested in subscribing to the contemporary forms of the novel being pursued the time. For him, who came in 1938 from Victorian Britain under the clouds of war, experience dictated the form.

The book that came out therefore was startlingly different. It was a slim novel of 122 pages, fast paced and unusual in terms of content, structure, craft and sensibility. The POV varied from omniscient to first person to epistolary. This treatment gave the novel an interesting texture. And it became a classic.

The book was widely read and ran into very many editions. But sadly, this new form, although much appreciated, remained a singular endeavour that was not emulated. Shanta Gokhale also mentions Ranaangan has been translated before, being a classic. But Bedekar never did write another novel.

A shipboard romance, World War II looming in the background, with the subtext of the rise of fascism – that’s the plot of Ranaangan in a single line. But this slim, fast-paced novel, is much more than a love story, even though the thread of the Herta-Chakradhar romance is what sustains the storyline. Yet, the underlying motif of the novel is definitely fascism, and as seen through the eyes of the protagonists.

When Chakradhar Vidhwans gets on board at Genoa, he has been in Europe for two years. He appears world-weary, cynical and certainly not in a mood for romance, all he hopes is to get ten days of rest and disembark at Mumbai. But then he meets the world in a microcosm, including a young Maratha doctor, a Muslim, a Sindhi, and a whole lot of other people including a number of Germans who are exiled Jews on the way to their port of refuge, Shanghai. Herta and her mother are among the latter.

Chakradhar is a middle-class guy with a keen eye. Look at how he observes “I could not tell what nation they came from or what religion they followed”. Us and the Others are clearly indicated here. But his thinking does converge into “If we are thinking of Nationalism as a revenge, if this becomes rooted in our history as a way of thinking, what becomes of man’s evolution?” And “…this ordinary Jew standing in front of me. What was his crime? Why was he being punished? Was the need of the nation greater than the needs of the individuals who compose it?”

As we follow the passengers stepping ‘below’ at each port of call, the short trips add to Chakradhar’s fabric of narration. At Naples, it is he who experiences racism at the hand of a mere waiter and is outraged. He is addressed as a ‘black’ and interestingly, the fair-skinned Jews are not affected. This incident connects him and Herta. Yet, Chakradhar is determined to let this fancy pass, as he disembarks at his homeport.

Around him, the conversations become choppy, and he also learns what it means to be a refugee. He notices the exiled Jews making the best of their time aboard, where they are not being given differential treatment. He observes them “intent on savouring every happy moment, trying to extract every last joy out of the present”.

But at Port Said, their German passport denies them entry to the shore. “German Jews are not allowed on these shores”. An ensuing conversation about Palestine and if it was the home of the Jews or the Arabs sets Chakradhar thinking about how history has many faces and how no nation can give evidence of ownership.

Is this a political book? Yes, certainly! It talks about the many histories of the world, of how illiberal nationalism can be. Of ‘what happens to Jews in Germany concerns everybody in Hindustan’. Of how deliberate and continued propaganda normalises our hate of ‘others’ who don’t eat, pray, worship, or treat women, like we do. It asks all the pertinent questions for today, with politics as subtext. It addresses both the freedom movement in India as well as the erstwhile tempestuous world politics. The instability of the ship is a metaphor for the instability of the world around.

The book is startlingly prescient, considering it’s written in 1939; it talks about ‘exterminating the Jews’. It portrays an urban, modern sensibility of form and narrative. We are shown Herta’s Berlin experiences as a German Jew, of love as a consummated act on board, the booze sessions where the undercurrents of opinions come out in full blast, Chakradhar’s sketches of the fleshpots of Europe, of how young soldiers are sent to the whore house to have sex before they go to war. This could not have been penned in an Indian novel at that time.

As the book concludes, the readers are saddened, not just because Chakradhar walks away from his love, but because they realise with a shock that nothing seems to have changed in the world in eight decades. The book makes us uncomfortable and asks us, how are we treating our outliers today? And more than that, how are we responding to the ‘other’ people in a moment of truth!

Such impact can only mean one thing, the translation is very effective; it is fluid, luminous and seamless, and reads like an original.

And as Jerry Pinto says, this book is an important human document!

If this review makes you want to read an extract of Ranaangan, here it is! https://indiannovelscollective.com/blogs/as-we-celebrate-our-75th-year-of-independence-take-time-out-to-read-an-excerpt-from-vishram-bedekars-ranaangan/

The Author: Vishram Bedekar, was the professional name of Vishwanath Chintamani Bedekar (1906-1998), a prominent and immensely popular playwright, writer, and film-maker, and known for penning some of the classics of Marathi theatre like Brahmakumari, and Tilak Ani Agarkar. His autobiography, ‘Ek Zhaad Ani Don Pakshi’ (A Tree and Two Birds) won the Sahithya Academy Award in 1985. Bedekar was a trained cinematographer and has directed over 15 films. Ranaangan is his only novel and created a sensation in the literary circles at the time of its publication in 1939.

Jerry Pinto (1966- ) is a much-honoured litterateur, a Mumbai-based poet, editor, writer, journalist and translator working between the Marathi and English languages. He has published 13 works of fiction/non-fiction/poetry and 9 works in translation.

Suneetha Balakrishnan A Creative Writing Trainer certified by the British Council, she is a journalist, translator, editor, and writer; working in English and Malayalam, and across genres. She has written for The Guardian, The Hindu Literary Review, The Business Standard, The Caravan, The Mathrubhumi, and Indian Literature. She is a committed bibliophage and lives in Thiruvananthapuram, her hometown. Write to her at suneetha@usawa.in