‘So many ways of tasting neon’

Women Who Wear Only Themselves by Arundhati Subramaniam, Speaking Tiger, 2021, 176 pages, Rs. 499 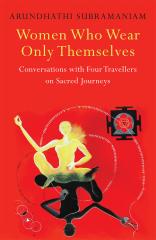 The world is split. Blocks and brackets. Sects and silos. Each with a checklist of do's-and-don'ts. Each claiming to know the Answers, the Right Path. And here I have in my hands Arundhathi Subramaniam's newest book, 'Women Who Wear Only Themselves’. By the time I finish the book, I am struck by the things this book is not. It doesn't offer you a fits-all follow-through flowchart to get you to Valhalla. It doesn't posit an alternate dogma to tip the scale in your favor. It doesn't tantalize you with an easy esplanade or elite entry. It doesn't even pretend to sweep a wide arc. Like its women paring away incidentals and inessentials, this book is just that, it wears only itself. Subramaniam lets us in on her conversations with four women she chances upon on her own spiritual quest, four exceptional women of extraordinary gumption, each on their wildly diverse roads and roadblocks. Lesser known, at times choosing anonymity over assemblage, laying bare their hurdles and hassles with startling candor, they stand resilient, mapping out their own self-definitions.

Why do they rappel down a chasm with no map or measure, no promise of belays or bowlines to an uncharted terrain with, perhaps, its own physics, why embrace the pain over the numbness offered by the illusion of choice? They respond to, and thereby honor, an inner calling, just that, a synaptic lingering, a gear which creaks to pirouette than turn, a needle wanting to embroider one French knot, then the next. 'Be with Shiva for the sake of being with Shiva,' Balarishi says. Subramaniam calls it ‘thirst’, the motivation to pen down these fortuitous encounters. So, for me, there are five women.

The book is structured in four sections; each luminously segued into the next with poems. Subramaniam deftly weaves in the silences and sounds of each of these women, a seasoned listener, picking up the pauses as much as the words as they slip into warp and weft, at times melding in so that we hear them whisper to us directly, her language mirroring her poetic quest, 'how to turn language from ornamentation to aliveness; from cultural acquisition to swanflight.' The first section 'Clothed in Emptiness' is about Annapurani Amma who the writer meets at her ashram in the village of Chinnalambadi, eighty km from Chennai. She quilts together gleaned scraps of Amma's former life—how she unclothed herself of all superfluities: her past life, her family and her clothes. Densely matted with her raucous laughter, non sequiturs, songs she sings for and arguments she has with a whole line-up of gods and gurus, this section is replete with revelations. The slowing down, the softening when she talks about her guru, Sadashiva Brahmendra, who lived three centuries ago, whom she calls 'Thatha' (grandfather), and her girl goddess Valai Bala renders a lingering silence in the midst of the yarns-in-exuberance.

The second section 'The Reluctant Guru' is about Balarishi who was hustled into the life of a spiritual guru by circumstances, fast-tracked by financially struggling parents at the tender age of ten. Subramaniam puts together this section in careful plaits, the way Balarishi tries to disentangle her thrust-upon life of ochre, subverting directionality, going back from a saint's garb to jeans and T-shirt, slackening precocious rigidity and rules, and letting her uncanny connection to auditory revelations and thereby spirituality to naturally take shape. Balarishi's anger and regret in an unlived childhood, her wish for a bunch of friends to have coffee with, her new resolution to travel more unfurl slowly as she is ushered into talking. This section is braided with threads which spin to existence as we speak, fresh and forming from the fibers—as Subramaniam says, 'like being present at the birth of a story'.

The third section 'What it Takes to be a Redwood Tree' is how Latamani, a Californian scholar, plunged into an alter-universe of pain and unusual Presence after a road accident-inflicted cerebral damage. This section reverberates with resounding silence, an overdosed infusion from which she is struggling to surface, a desperate search for discernible language to express her state and non-state she calls 'isness'. Guided by her body, Latamani experiences an intense interconnectedness with the world, with humanness, with the present moment, alive and breathing as a synergistic continuum.

The fourth section 'The Leap into Monkhood' is Maa Karpoori's tryst with spirituality, channelling her fiery abundance into a constructive streamline, jungleness to cornucopia, with the discipline of the ashram including a three-year long silence. This section is suffused with an array of hearty anecdotes. Maa Karpoori fondly reminisces her pre-initiation life, her fascination to saris, her grit and gumption to question, and Subramaniam talks about what real renunciation would mean: 'not a narrowing of the heart into cloistered sanctimony, but the expanding of it into an amplitude of spirit.' Such expansiveness is hard to conceive, not to mention arduous to achieve.

One thing that stands out is how the path, for none of them, is prescriptive: not scripted or scriptural, it's experiential and solely one's own—custom-tailored, made-to-measure, found, figured. Annapurani Amma says, 'I don't tell my students to renounce the world as I did, just learn to live meditatively', 'I have come here to work on myself, not to transform anyone'. No racetrack. A silent, silted meander.

The travails of their individual trails are never etherealized, it's left raw and sutureless, each thread bare, each knot painfully tangled. This journey is a deliberateness to stay in the molten earthliness, face the embodiedness rather than flee.

Their one-pointed stance without posturing is a solace in the material-driven 'crazy autopilot of samsara' we seem to be stuck in. Balarishi's conscious decision to stay away from trumpet-marketing and not join in the fray is wisdom beyond her age.

The poems connecting the sections come from Subramaniam’s award-winning collection, 'Love Without a Story' with two poems from 'When God is a Traveller'. They are in themselves a treat—the closing lines of 'Tree': 'so many ways of tasting neon/so many ways of latticing a wind/so many ways of being ancillary to the self/without resenting it'. Positioning them among the narratives, they act as a bridge, two rungs, a layover, a few light-years, a time-lapse. With her enduring and ever-deepening involvement in Bhakti poetry, spirituality and literature, she assimilates threads across lapses and latitudes to bring together the relatedness of self-actualization, transcending the siloed-and-systematized. She takes us through poems and passages on the ideologies in discussion—avadhuta, nada yoga, Siddha tradition and Tantra. She distils the core ideas into a two-paged afterword, 'They are part of a quietly growing chorus—one that recognizes the importance of honoring a woman-nourished, woman-vitalized, woman-inclusive spirituality on this planet'.

As I crisscross on the floor to tune in to my daughter’s doll-play, the kariveppila sapling on the balcony soaking up the cloud-ridden sky, Maa Karpoori says, ‘my home is lit’, Balarishi’s mantras homogenize with fire, Latamani’s body herds her with tantric light and Annapurani Amma loudly affirms, ‘foolish women, am I not proof that women can walk alone? That they can live on their own terms?’ and I feel empowered to be alive, to be a woman, to be present, a little more, a little closer me, a little closer now.

Dr. Rahana K Ismail is a left hander, a poet and a doctor from Calicut, Kerala. Her work has appeared in nether Quarterly, Verse of Silence and EKL Review. She can be reached at rahanakismail@gmail.com when she is done rummaging through the woodsorrel, ironweeds and adiantum with her daughter.