Through the Artist’s Eye

Through centuries, nature has always been a source of inspiration and contemplation for visual artists. Simple as it seems to a laymen eye, every element of nature—rocks, trees, flowers, water bodies, mountains and the atmosphere turn complex elements when they have to be portrayed in paintings or drawings. When an artist attempts to draw an accurate sketch of any simple object for e.g. a rock, she employs a variety of skills—from the minutiae of observation to interpretation on the chosen medium. Then, there is the challenge of how to bring out the best from both the medium and the artist’s observation. The artist then repeats this process over and over again with multitude of subjects until one achieves mastery. Everything for a visual artist is about interpreting light and shadow. When it comes to nature, this aspect changes in a fraction of second. The beauty becomes almost intimidating when the artist attempts to capture one particular fragment of the mood she wants the onlooker to experience.

Here are a few examples, drawn from my favourite landscapes, across time. 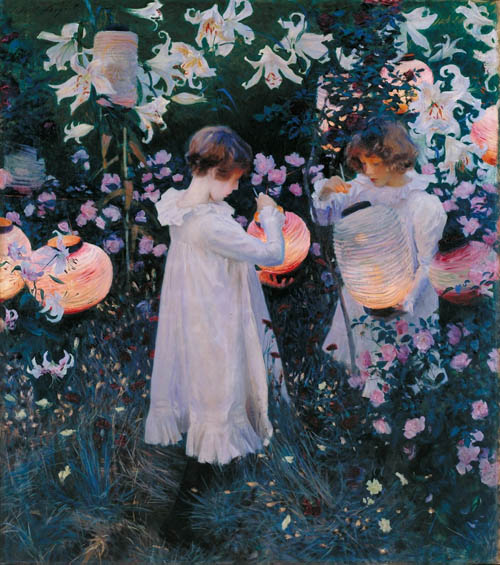 This is one of my favourite paintings by John Singer Sargent, “Carnation, Lily, Lily, rose”,1886, Dimensions – 153.8 x 174 cm, oil on canvas. The inspiration of this painting came during a boating expedition Sargent took on the Thames at Pangbourne in Sept 1885, during which he saw Chinese lanterns hanging among trees and lilies. The work on this painting took a very long time because Sargent was able to work for only a few minutes each evening when the light was exactly right. He worked on it from Sept – Nov 1885 and again in summer of 1886, completing it sometime that October. 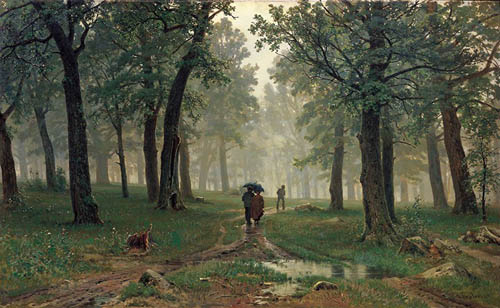 “Rain in the Oak Forest” by Ivan Shishkin, 1891, 124x204cm, Oil on Canvas. Shishkin was one of the greatest Russian Landscape painters of 19th century. He was nicknamed as “ Czar of Forest” by his contemporaries. In this painting, he captures the subtle and transient effect of spring drizzle by using the play of lights and darks. The placement and angles of the oak trees with the tilted horizon and the pathway, draws the viewer eyes from foreground to the background, creating a sense of space and vastness. There is also variety in how the trees are standing, as they are in nature, not nearly symmetrical, but carrying in them an alluring beauty of synchronicity. 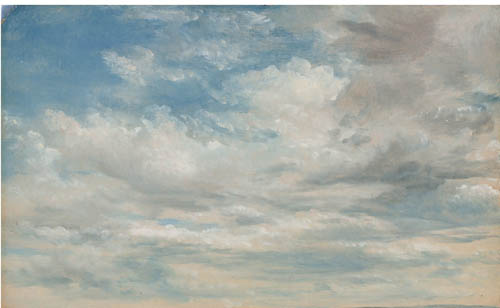 Clouds, John Constable, 1822, 30x48 cm, Oil on paper on cardboard, example of one of the studies created at Hampstead, North London In a landscape painting, sky is the principal source of light and the cloud cover, formations of cloud and atmospheric effects influence the composition and appearance of the painting. Capturing the sky with its ever-changing effects is what made Constable create 50 paintings of the sky between 1821 and 1822 in Hamstead and around 100 studies of the same. These were made for him to understand different weather conditions and then were used in bigger landscapes. He referred to such painterly exercises as “skying”. These loose studies help an artist capture the instant mood of the subject and are fluid and expressive in nature. 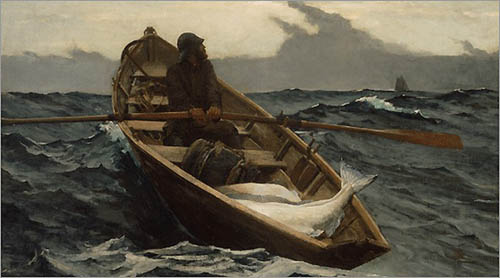 
Winslow Homer was an American artist who believed that art should be based on direct observation of nature. In 1880 he moved to the coast of Maine where he could paint water scenes. When you look at his paintings you could almost feel the wave coming at you. 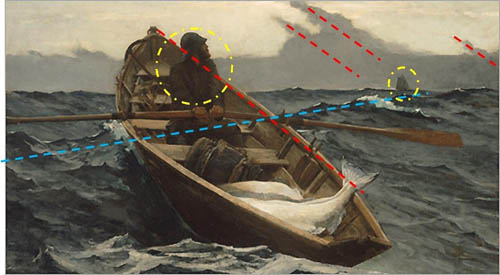 It is interesting to see how with the use of diagonals, lines, shapes, direction and colours an artist creates a balance in a painting thereby fabricating a compelling narrative. In this painting a lone fisherman is trying to row the boat while balancing the weight of the halibuts weighing him down. The waves have picked up seriously. The blue line of the wave is balanced with the red line or the strong diagonal of the boat. This red line also points to the worried face of the fisherman, who is looking towards the vessel and the growing fog.

Below is another seascape by Homer. 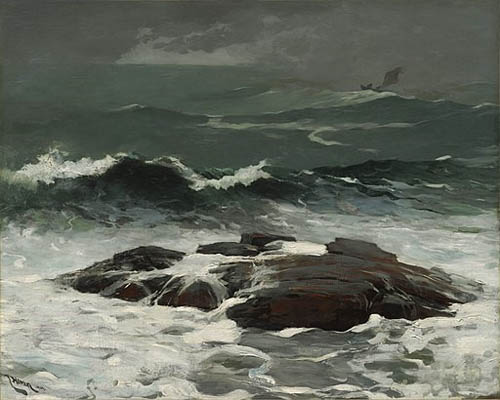