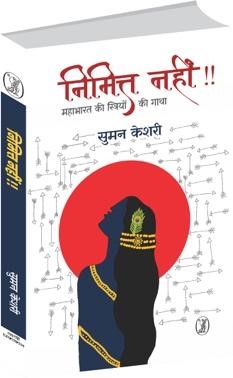 The epic Mahabharata has been a treasure trove for centuries for thousands of writers from Indian languages, borrowing themes and characters to embellish their creative works, novels, plays, stories and reams of poetry. Even non-Indians have been trapped. Not only the iconic Peter Brooke but many others deconstructed its characters to produce their plays.

For Indian writers, Karna and Draupadi were the most sought after characters because their tragedies evoked extreme disgust and awe. Karna was abandoned as a newborn by his mother, a Princess and after suffering years of infamy for low parentage (by adoption), was rescued by no less than Duryodhan, the aspiring crown Prince of the Kuru dynasty and arch villain of Mahabharata. Draupadi was gang assaulted by arch villain and cronies in the Royal Audience Hall in full view of her five husbands and all the elders of Kuru dynasty. She was saved of ultimate ignominy by divine intervention by none other than the originator of Gita, Shrikrishan himself. A friend too who bequeathed his name Krishna to her numinous titles. Karna's loyalty to his villainous savior outranking sublime qualities of magnanimity and valor added spice to the saga. Draupadi's ignominy was avenged by her five husbands after so great a time lag that three generations perished in the nuclear holocaust like conflagration that followed. Perhaps when its author Ved Vyas declared arrogantly that whatever existed in the world was portrayed in it and whatever was not in it was nowhere on earth, he saw this endless line of future authors. Many of them produced great works of their own.

Suman Keshri is a worthy addition to this lineage. Her collection of short poems Nimitt Nahin is not the only book she has written based on characters from Mahabharata; it was preceded by a play on Gandhari, married to the blind eldest son, Dhritrashtra of Kuru dynasty. She had deconstructed his character with rare psychological insight delineating how his suspicious and jealous nature forced his beauteous queen to blindfold herself to prove her fidelity to him.

Nimitt Nahin is in the same vein but much more ambitious in the range of characters depicted. It has three unique hallmarks.

First, it concentrates on only women characters from the epic.

Second, it depicts women from numerous eras and generations, beginning with the ancestral Shakuntala, Savitri, Ganga, Madhavi and Satyavati, going on to Amba (Shikhandi) Ambika, Ambalika and the Dasi; on to Gandhari, Kunti, Madri, on to Draupadi, Subhadra and ending with the youngest Princess Uttara, widow of Abhimanyu, son of Arjun. Suman talks of them with a rare understanding as if she herself belonged to all the generations.

Third, she has chosen to write not only about the well known women of the epic but obscure ones and some hardly ever mentioned by readers or other writers.

Think of Hidimba, who declared her love for Bhim not waiting for him to do so. She wooed and wed him and conceived a son, of her free will, without shedding her primitive or unrefined jungle girl attributes becoming a Swayamvara in the true sense. She does not choose a husband from the Princes invited by her father to a pre-arranged swayamvar but arranges a swayamvar of one, herself. Suman does not gloss over the unsavory fact of her cheating her brother for the sake of the beloved man. Uloopi is no less a swayamvara as she takes Bhim to her netherworld to love and make him her own and birth a son rather than follow him to his world. Chittrangada is the third one in the trinity, who however used the traditional weapon of beauty to entice Arjun to be her lover and give her a son. Perhaps it was the snare of beauty which made Rabindranath Thakur, choose her as the heroine of his dance drama, Chitrarngda. The other two were too raw, earthy and intrepid to appeal to his sensitive, masculine poetic sensibilities! But that was what made Hidimba and Uloopi unique. They lured city bred Princes away from the luxurious, soft spoken and fastidious contours which had defined feminine charm till then. To Suman's credit, she can identify with them vibrantly.

It is the third characteristic which underlines the uniqueness of Suman Keshri and that lies in the depth of her empathy. She performs a rare parkaya pravesh to become one with their minds and hearts, and dare we say souls!

That is how she manages to reach out not only to Subhadra and Dushala, the only sister of 105 brothers but even Bhanumati, wife of arch villain Duryodhan. Has anyone ever thought of her or her suffering! Or the Dasi or servant girl sent to the ungainly Rishi, invited to perform Niyog for Ambika and Ambalika, two of the three sister Princesses, abducted by the revered Bhishma to wed his sickly step brothers. In fact he earned the sobriquet Bhishm because he swore to remain celibate for life to protect their throne. Ambalika found the Rishi too loathsome and sent the Dasi instead, when asked to repeat the act with him, having covered her naked body with yellow pastes the first night. While Ambika had closed her eyes to produce a blind son, Dhritrashtra, Ambalika gave birth to impotent Pandu. Their stories are well known and oft repeated but has anyone ever mentioned the Dasi in their versions of Mahabharata? No, not until Suman Keshri chose to do so. The Dasi had conceived her son, Vidur, in a moment of mutual pleasure, which she had evoked by her own will, making the Rishi desire her and she, him. So, Vidur is born perfect man. As Suman/Dasi declares succinctly; no version of Mahabharata talks of the Dasi but none is complete or imaginable without Vidur.

That was my grouse against Peter Brooke; his was only version with no room for Vidur. I was mollified by the fact that he was the only one who brought Bhishm down from his high pedestal and questioned his dubious actions, starting with the abduction of Amba, Ambika and Ambalika.

Amba was the recalcitrant one. Rejected both by her lover because of humiliation he felt at defeat at the hands of her abductor Bhishm and by Bhishm, because of his vow of celibacy; she had no option but to swear revenge on Bhishm, whose dastardly act it had been in the first place. She can be called the most obvious female pawn in the nefarious game played by men in the epic. But her sisters were equally so. Abducted to consort with kings, who proved infertile, they were forced in Niyog with a man they found loathsome and then punished for life for expressing their disgust, by bearing inadequate sons. Gandhari, forced by a stratagem played on her to consort with a king, blind not only outwardly but inwardly was a pawn of Bhishm too. There were other pawns, Madri forced to marry a sick man already wedded to another just because of her fabled beauty. All of them bore it with fortitude. Suman treats them all with empathy and Amba too, the only one who rebelled. She was reborn as a man, Shikhandi, after performing rigorous penance through many births. Observe the grand irony; she was denied revenge as Bhishm refused to fight a woman! Magnanimity or chivalry it most certainly was not! It was sheer male arrogance which added insult to injury not only to Amba but the entire womanhood.

Yet no one questioned the reverence he was held in, not even Suman; only Peter Brooke.

Draupadi is of course the most celebrated pawn in the epic as she was actually used as one, by her much lauded righteous husband, again someone left unquestioned by most future writers, who borrowed from the epic.

Suman Keshri attempts to rescue the women from that label. Not pawns, is the title of her book. She has poems full of empathy for each one of them, even Kunti.

I find Kunti a selfish and heartless woman. A dubious boon or curse by Durvasa gave her the power to lure Gods to consort with her and give her exceptional sons. I can forgive a young teenager calling upon the Sun God, out of overpowering curiosity. I can forgive an unmarried Princess feeling petrified at producing a son, Karna, and abandoning him. I can understand her not trying to find his whereabouts or remaining indifferent to them after becoming a powerful queen. But I can't forgive her playing politics and asking her sons to share Draupadi as if she was a sweetmeat, not a woman like her. What gave her the right to make a pawn of Draupadi? She did not want her sons to be divided against each other, fine. But that did not give her the moral authority to reduce another woman to a piece of treasure. Her final act was one of unbelievable cruelty and self obsession. She took advantage of the vow her son, Karna, had made to not deny anyone anything, early morning after his ablutions? She had the hideous gall to ask him to spare the sons' lives, knowing he would not refuse any beggar a boon. Offered him a bribe on top; promised him a major share in the kingdom! What a befitting answer Karna gave her! All you care for is to be the mother of five sons. I grant you your wish. I'll vanquish only one of your sons; you can then replace him with me!

But Suman magnanimously shows Kunti grieving over the bloodied body of her abandoned son and remembering with remorse, the death of the bhil woman with five sons in the Lakshagrah, which had made their escape possible.

For me, Amba remains the crucial character in the entire epic; the crucible through which one should eye its entire structure.

It would seem that at one point Suman agreed as vouchsafed by her poem, Amba-4.

Neither man
Nor woman
Am I just
Lump of flesh
Branded with red hot tongs
Of revenge?

No! I am the canvas stretched over centuries
On which
Was drawn the epic of
Drupad's humiliation
Bhishm's arrogance
Dhritrastra's envy
Duryodhan's greed
Shakuni's deception
Guru Dron's obsession
And Bhim and Arjun's fury

Mridula Garg (born 1938) is an Indian writer who writes in Hindi and English languages.She has published over 30 books in Hindi – novels, short story collections, plays and collections of essays – including several translated into English. She is a recipient of the Sahitya Akademi Award. 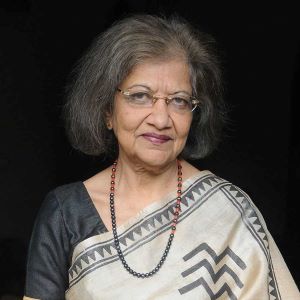