The Dreams of a Mappila Girl

After she had acquired the key to the house in Kozhikode, Umma became very busy. The schools in which Achu and I were to be admitted would open soon. And Aati had passed his tenth class exams and had to secure admission to a college.

At the time that Ikkaka had passed his tenth exams, he had announced that he did not wish to go to a regular college, and that he wanted to study art. So he had enrolled at the Madras School of Arts. He was home now since his vacations had begun.

‘I sent him to Madras only because Aavuty Puthiyapilla forced me to,’ Umma would say. ‘We had even paid the fees for Ofoor at Devagiri College in Kozhikode. But he refused to go to college even after classes started. He said he wanted to go to Madras to study art. His favourite pastime from the time he was a child had been to sit in the upstairs hall and draw on pieces of paper. He would not show his drawings to us, but would tear the sheets of paper and throw them into the drain. When it rained, the paper blocked the gutter. Uppava used to scold me because the gutters were getting blocked due to my son’s habit of throwing paper into them.

‘Ofoor did not run around and play even as a child. He did not have the constitution for it. He was thin and pale like white sardines, and would get sick often. I used to give him so many medicines to make him healthy and strong. He put on some weight only after consuming the lehiyam given by Govindan Vaidyar. I was nervous that he would fall sick after going to Madras. I also felt that he was wasting his time studying art when he should be going to college to get a degree that would help him secure a job. My brother Kadu said moreover that he’d heard that students of art slipped into the habit of smoking and drinking. I became even more worried after hearing this. I decided not to send him anywhere.

‘That’s when Aavuty Puthiyapilla sent his car to bring me to Kozhikode. He made me understand that studying art could not only get Ofoor a good job, but could also make him famous and earn him great recognition. I was relieved when he told me all this because I knew he wouldn’t lie to me. But even then, I remained quite anxious till Ofoor finished his studies and came back home.’

Umma believed that we should not ignore the advice of educated people. She had high regard for Aavuty Puthiyapilla, who had studied abroad. But Uppa was not impressed. He used to make fun of Aavutikka and call him a sahib. Umma ignored his sarcasm towards their son-in-law. Any decision she took concerning our education, she did only after consulting him.

‘Soora, will you please come over here?’

I was sitting on the low wall surrounding the nalapad, watching the sunlight fall through the wire net above. Achu’s voice roused me from my dreams of Kozhikode. I went to the middle hall in search of him and found everyone assembled there. Ummama’s musical chest lay open. I liked to hear the music that played when the lid was lifted, and got very upset if they opened the box in my absence. I hurried forward. Ummama was sitting on a wooden chest nearby and Umma was taking out items from the musical storage box. Ikkaka, Aakaka, Aati and Achu were standing around the box watching Umma.

‘What are you all doing?’ I asked, joining them.

‘Oh, you’re here. Where were you? We called you so many times so you could be here to hear the music when the box was opened,’ said Achu.

We only rarely opened the storage trunk, and everyone liked the ceremony attending the event. The musical chest contained special items of clothing belonging to Umma and my sisters—wedding dresses, the kasavu garments with their decorative details woven with gold thread, kasavu mundus made of Benaras silk called maathaav, kasavu thattams, the silk covers and lace draped over canopy beds in the bridal chamber. When you opened the box, the fragrance of kaithapoo and the sharp, stinging smell of naphthalene balls intermingled and wafted through the room. Occasionally, Umma opened the box and took out the kasavu garments to air them in mellow sunlight. Folding the silken fabrics embroidered with fine gold threads and placing them back in the box, she would narrate the story behind each one.

‘I wore this for the mehndi ceremony the day before the wedding, and this one was the bridal dress. Aasi wore this one for her wedding—her father brought it from Bombay. Ummi also wore the same dress on her wedding day. The fabric is so good, it seems to me its beauty will not have faded even ten years from now. I hope to see Soora also wearing this for her wedding. This material must be quite costly now.’

‘In this town, no one else has such fine clothes,’ Mannattamaritha would say if she was nearby. ‘They are all so beautiful. But even so, we will not use these for Sooramol’s wedding. Nowadays, everyone wears ponchappa sarees with golden borders and motifs.’

If Ummambiumma overheard this, her rejoinder would come swiftly. ‘Oh, a modernist wants to advise Ammayi. Do the gaudy ponchappa sarees of today have the beauty and grace of these fabrics?’

Umma intervened quickly to douse the brewing quarrel. ‘Now, both of you, don’t fight over this.’

‘Why are you all talking about wedding clothes?’ I asked fearfully. I wondered if Umma was planning to marry me off before going to Kozhikode.

‘Mariyooty is wondering if we should get you married soon.’

Ummama’s reply appeared to confirm my fears, and I started crying.

Achu clapped his hands and sang as he circled around me. ‘For Karachapetti’s wedding, we will have cat fry and ghee rice.’

‘Assankutty, will you please be quiet? I don’t have time for all this. I opened this box today only because Sherif asked me to check if there was any material we could use as curtains in the house in Kozhikode. Take what you want and close the box.’

Saying this, Umma left the room.

Aakaka and Ikkaka looked in the box and took out some silk bed curtains and lace.

BM Zuhara is a writer and a columnist and has written novels and short stories in Malayalam. She won the Kerala Sahitya Akademi award in 2008. 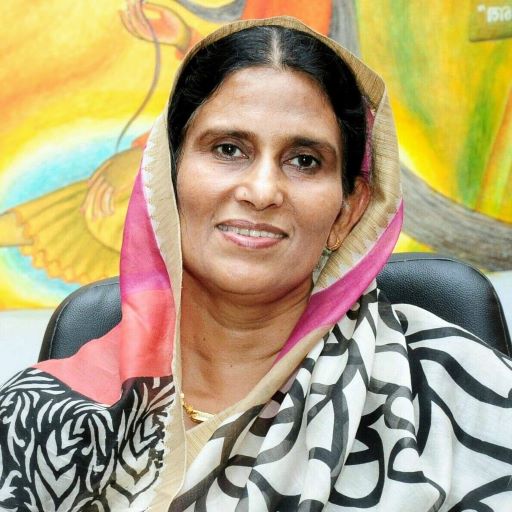 Fehmida Zakeer is a writer and translator hailing from Kerala and has won awards for her short stories.