Budhnu was a rapid learner. A new language every six days as he picked up tourists from Howrah station and took them sight-seeing for the next five days. Running barefoot on the city’s streets and pulling his rickshaw with a firm grip and tug on the wooden bars, he keenly followed their dialects, hearing carefully to the correct usage of the words. Yet today, he found out, in matters quite simple, he knew no language.

The morning had been usual. At daybreak the rickshaw pullers were woken up by the gurgling sound of the water spouts lined along Hare Street. They filled their vessels, washed and bathed, turned the chores into a lively community affair.

Budhnu and the other men then engaged in small gossip, a daily affair they diligently undertook before embarking on twelve hours of toil. Sometimes, Budhnu thought the scene before and the gossip later, was as much part of their lore by its sheer repetition, as the wood-and-aluminum handdrawn rickshaws!

At about seven, he was beside the paan-stall, under the high light-mast.

Shouted to draw more arriving passengers than the rickshaw’s rubber horn could, the horn pressed simultaneously though, a kind of juxtaposed melody.

He attracted passengers deboarding the train from Chennai. If it’d be the one from Bengaluru, or Gujrat, and then he’d use a different language, and with his sweet talk, convince the tourists to hire him.

One time, it had been “ethe! ethe!” ( here! here!) for passengers from Amritsar. He remembers the young couple from Punjab, and how after a trip to the zoo, and offering him ice-cream, they’d asked what his name meant.

He had no answers. Perhaps it meant something sweet and little in his tongue, hence his mother must’ve named him so. What if it means something else, something villainous, they’d asked. He had wondered, What if it meant scape-goat? And the young man had laughed at his own joke.

Scapegoat? In any language, that’d be awful. No! One doesn’t need language or translation for love, he’d said defiantly.

The couple from Chennai he had just picked up were middle-aged, and very good to him.

Now it was nearly ten on the clock. As he had pulled along Hare Street, he explained to his passengers that the sounds of this place hardly ever ebbed. Just outside the Howrah Railway Station, it was convenient for people from the suburbs to take the local trains early in the mornings, buy wares cheap, return by the evening local and sell them back home for a small margin. Food stalls catered to this lot, doing brisk business. Vans, hand-carts, rickshaws, egg-yolk-yellow taxis, rickety buses jostled, parked erratically wherever it suited the driver---to pee, or chat, or a cup of chai. None complained.

(lunch?) Wife asked her husband. Budhnu understood, and, while they were passing an eatery, parked his rickshaw to the couple’s amazement. How did he know they were planning to have lunch?

They went inside. Budhnu sat by the pavement and waited.

Seeing a commotion nearby, Budhnu called out, “Arre! Joto mat toto path” (there are as many paths as are ideas) to the group of people quarrelling in front of a banana-stall.

The crowd stopped to gaze at him, pleasantly surprised by the modest man’s knowledge of idioms in his non-native tongue.

Later, he took the couple to Victoria Memorial and Russel Street Museum.

He sang a couple of Hindi film songs. They repeated after him. It was nearly eight when he took his passengers to their hotel.

The unceasing cacophony of the streets still lingered in the air even as darkness fell. He made his way through the squalid, overcrowded conditions. Noticed that the raised, frayed tempers of the hawkers were toned down now. Done with their bargaining and buying, the vendors were folding their makeshift stalls and preparing to be gone.

Budhnu’s legs carried his rickshaw like wind as he reclaimed the carriageway on the last stretch of his journey — he always was frustrated to be pushed to the sides by traffic at daytime.

He crooned a piece of bhatiyali that wafted afar.

(O Boatman, take me across the river to my beloved)

That is when the itch started. Parked where the rickshaws were lined against each other — identical, multi-colored, stacked like dominoes. He could no longer ignore the clouds of passion forming in his heart. The thought of his new bride, she who lived a night’s train journey away.

Luscious dark night caressed him in gusts of cool breeze from the Hooghly river. All he wanted to do was to let his aching back touch the stone-cold cobbled sidewalk. The other rickshaw pullers lay down there too and were soon fast asleep.

Bare-chested and bare-footed, these migrant rickshawallahs had never known anything better for a living. Generation after generation they came down to the big city and ferried men and women, grain sacks, textile cartons, broken-down automobile engines, and what not, in their rickety carriages; their sweat and toil earning them tinkling coins that they’d carry back to their village.

Budhnu was one of them. Like his father, and his father before him. Never thought of doing anything else---never been concerned about the singular monotony of his young life, the drudgery of his existence. ‘Thinking’ was a luxury he couldn’t afford, so much so that last month when he visited his village, he didn’t know he was going to get married. Five days later, when he returned to the city, he was a married man!

Sleep eluded him. He kept thinking of her, alone. So he could earn enough for her, for them.

He turned, watched laborers loading wares onto waiting trucks in the pitiful darkness. Piles of banana peels, paper cups, discarded wrappers dumped by the corner, around the truck tires, were emanating stinking odors, yards away from where the rickshaw-pullers were sleeping.

The light, hung at the temple porch across the street, flickered in the wind. It reminded him of the temple he and his bride were married in.

He burst into loud sobs remembering his new bride and her dark vermilion adorned forehead. Her ecstatic face danced before his eyes; so did postcards of a home they’d perhaps afford sometime, and farmland which they might buy. Perhaps a cow...

For once, Budhnu began hoping. He’d take the train out of the city tomorrow, to her.

He murmured, repeating in the language of his birth,

He tried constructing lines in his mind he’d say to her when they’d meet. And that is when he realized he knew not what to say. His language skills deserted him. What might he say? How to tell her how much he’d missed her, how much Budhnu loved her?

Mandira Pattnaik's fiction has appeared in DASH, The McNeese Review, Penn Review, Watershed Review, Bacopa Literary, Contrary, Passages North and Amsterdam Quarterly, among other publications. Anthologies where her work found placement are Best Small Fictions (2021), Best of Asian Speculative Fiction (2021, Insignia), “And if That Mockingbird Don’t Sing” (Alt Current Press), “200 Poems Around the World” (Sweety Cat Press), “Ten Ways the Animals Will Save Us” (RetreatWest), “In the Belly of the Whale” (EllipsisZine) and “Everything Has a Price” (EllipsisZine). She edits for trampset and Vestal Review. More about her can be found at mandirapattnaik.com . On Twitter @MandiraPattnaik 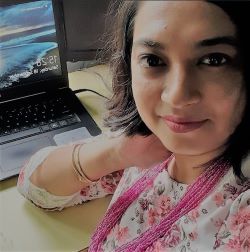