Aajoba looked like he was lying down peacefully. Like the days we finished a lunch of sliced deep fried brinjal, spicy aamti and rice, followed by a nice cold glass of buttermilk. But the makeshift bamboo stretcher he was lying down on, looked nothing like his creaking cot. I used to tell him often that we could get him a new cot made, just like his old one. He would just smile and say “What will an old man do with a new cot? Let’s just sun the mattress instead.” He liked sleeping on the fluffy, sunned mattress. I think he liked raining blows on it with a stick and seeing the dust fly more than sleeping on the sunned mattress. I should probably sun his mattress soon. This Vrinda Attya’s wailing sounds like the alarms they sound when shifts change in the factory behind our building. Janaki Attya’s sniffles are getting louder as more women move to Vrinda Attya’s side. Between sniffles, she groans “But he left us so soon. So unexpectedly. I didn’t even get to spend a little of my old age with my father.” Just look at the old crone making it all about her, lying in front of the dead without remorse. She wouldn’t have a cup of tea with him if at the end of her visit, Aajoba didn’t place some folded-up notes in her hands. I heard someone tell her “Don’t cry so much Janaki Tai, Damu Kaka won’t be able to go in peace then. He will want to stay back to wipe your tears.” Aajoba wouldn’t even kick a stone into a river of her tears.

Ashok Kaka, Rohan and our neighbour’s sons lifted the bamboo stretcher on their shoulders and started walking away towards the cremation ground to chants of ‘Ram-nam satya hai’ the only truth is Lord Ram’s name. That made me think of a joke Aajoba told me, I don’t remember the joke but only the punchline in which the dead body sits up and says “Gulaab jamun mast hai!” Aajoba would definitely do something like that. He is hilarious. He does this spot-on impression of Asha from our building, who has protruding front teeth. He squints his eyes and hunches his back a little to add flair to his performance. I feel bad about laughing at this act of his, at the expense of Asha. But I could never stop myself from laughing.

I am not allowed to go to the cremation ground with the men of the house. Men of the house, who hardly ever came to the house. When I asked why, a serrated voice from the crowd of women left behind said it’s because we can’t see the sight of a body being devoured by flames. Another said it’s because women can bring back spirits and ghosts with them, the long hair lures them. I think it’s because they want us to stay back and cook for the men who’ve witnessed death and felt feelings. So that when they come back, they can be mollycoddled and waited hand-on-foot even more. Must be so difficult for those fragile sons and fathers to do these womanly things.

We are home now and I’m making tea for each one of these idiots in a huge vessel. When I get the tea to the living room, Vrinda Attya says loudly enough for everyone to hear “Arre, why didn’t you tell me you were making tea, I would’ve come to help you. And then she scanned the tray and the kitchen platform behind me and asked, “Is there any khari biscuit?” She wants khari biscuit with her tea, next she will ask for cucumber sandwiches. Has she come to a tea party with the Queen of England? Janaki Attya sniffles as she takes the cup of tea from the tray and says “Baba wouldn’t want you to suffer alone like this. You’re young, you have to start thinking about your future.” They all have some newfound love and concern for me now. Their tongues drip honey, when each of them invite me to spend a few days at their homes. What they don’t say is – “Now that the old man is dead and you don’t need to care for him anymore. Come, be a maid for us. We will never let you forget how grateful you should be to us. We’ll also get you married off to someone vile but simple-minded from a godforsaken village so we can pounce on this house.”

They think I have forgotten how when I was a kid, they used to call me ‘this girl’ or ‘the girl’ when talking to Aajoba. Hearing them all talk now, I am glad I washed and kept Aajoba’s cup and saucer on top of the utensil rack. None of them deserve to drink from them.

Around dinner, people stop dropping in to pay respects. Office hours are over, come back tomorrow to mourn for the dead. And when there are no more people to pretend for, the two pumpkins start making excuses. Vrinda the white pumpkin says “My Rohan has office in the morning tomorrow and Sameer has his cricket practice. I was thinking I’ll go home now and come back in the morning once the two of them are off. Bashi, call me if you need anything.” Then for dramatic effect, she places her hand on my head and lets out a dry sob. As if on cue, Janaki the red pumpkin says “I forgot to bring mine and your Kaka’s medicines for the night. At our age, even one missed dose can be so problematic, you know.” I just smile and nod and put on the most understanding face I can conjure.

Yes, yes, go back to your lives. What’s the point of sitting here and mourning with your orphaned niece who your father cared for? You never cared much to do anything, you never will. All you did and can do is click your tongue and say “Poor thing, poor girl. Oh, she’s all alone, the poor girl.” And I know you only think of me when you want to feel better about yourselves. I see you all looking at me like a goat who’s going to get slaughtered. Have you forgotten about the cleavers in your hands? You can come back again tomorrow when you’ll have an audience to watch your kind, considerate and caring aunt act. Leave, you stupid cunts.

I wash all the utensils and with the curtain drawn at the entrance of the passage, get my towel to go take a bath. The pile of damp white clothes on the bathroom floor is full of sweat, tears, spittle and snot. So many clammy bodies hugged me, patted my back and shook my hands. I involuntarily shiver as I try to shake off all those people. I decide to soak my clothes in a bucket full of Dettol water and add a capful to my bath water too. The hot bath feels good. As I scrub myself with soap, I stare at the little spots on the ceiling, where paint is peeling off. One particular spot looked like the top of Aajoba’s bald head covered with puddle-brown freckles. The fresh maxi I put on smells as clean as I feel. I fill a small circular pot with water, put a steel glass on top of it and take it to the living room. I fish the medicine box out from behind the TV and keep it on the teapoy. When I go to the cabinet on top of the wash basin to get his denture-bowl, the teeth slosh around in it. Ayyaa! He went away without his teeth.

He went away. He doesn’t need his medicines anymore. The cot is empty.

When the rustling of my maxi against my leg startles me, I get a little worried about whether or not I’ll be able to sleep tonight. I close all the windows tight and check the bolt on the living room door once more.

In the dim light of the living room; it’s too silent without the slow whirring of the ceiling fan. I call out to Aajoba, hoping I will hear him respond to me in his crackly voice. Or at least hear the throttle of his throat clearing. The first thing I remember about Aajoba is this rumbling throttle – like someone was shaking round stones in an empty plastic dabba. It will always make me think of two cups of tea. Many years later when Aajoba told me of that evening I came to live with him, he began by saying he was afraid I was losing my words. No matter how much he spoke, coaxed or cajoled me the words wouldn’t come. The stuck words pulled my stomach in and stretched the skin out onto the ribs of my scrawny 7-year-old body. My eyes were two saucers, threatening to overflow every minute. That was the first time Aajoba and I had our two cups of slightly-milky, gingered tea. Two hot cups of tea, both poured onto saucers and a plateful of parle-g biscuits. He’d called me bashi – saucer, since then. I don’t remember how many saucersful of tea went in before the words came out. I now know that he made them come out.

Out of habit I am up at 5:45. The street lights look dimmer as the lamps in the sky begin to brighten. But my eyelids feel like lead, so I try to go back to sleep. As I feel a heavy drop of drool leave my mouth, I think of how Ajoba was always up at 5:30 in the morning. He would noisily clear his throat, and hack up a day’s worth of phlegm in the sink. Once he was done with this rhythmic performance of spitting, gagging and throat clearing, he would wake me up for tea. Just as I drift into something barely resembling sleep, I am woken up by an urgent rapping on the kitchen window, it is 6:15 am. I open the window with a rolling pin in my hand.

I’m immediately greeted by very urgent caws of a huge black crow. The cawing doesn’t stop till I put some milk to boil and bring out two cups and saucers, one from the rack in front of me and another from the top of the utensil rack. I add two spoons of tea powder and grate ginger into the vessel and ask Aajoba if he slept well. He flaps his wings briefly as if trying to shake off some sleep. I reach for the packet of parle-g biscuits from the steel dabba, wipe the sides of the cups and wait for the tea to cool down in the saucers.

Aishwarya is a copywriter by profession, a trained extrovert and an untrained yoga-doer. She enjoys the simple things that life has to offer – bad jokes, a glass of perfect-temperature water, a good book, a good song, petting cats, sunny days, plates heaped with hot food, overpacking for trips and linking arms while walking. 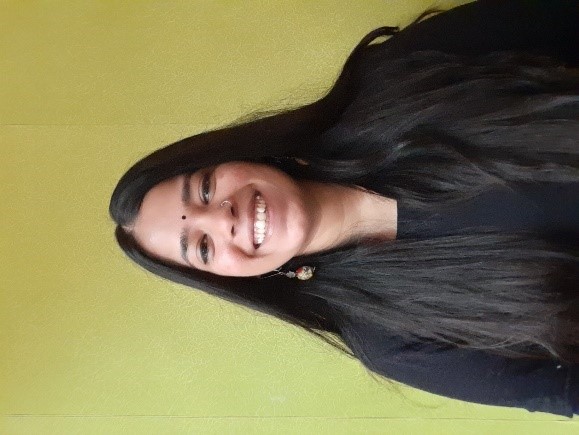