I like pressing the calling bell in my Dida’s house. It is on the wall in the verandah. I cannot reach up to it. But if I ask my Dadu, Mama or Ma or anyone, they hold me high and then I am able to press it. Ma says that it does not work but when I press it I hear some nice sounds. They always laugh about it. There is another bell too, on the wall outside, near that brown door. Many people who come press that and then Dadu answers “ke”. I know that Dadu will get up and open the door. He tells me not to come, tells me to wait where I am. I like Dadu but I like seeing who has come. So I don’t listen to Dadu and slowly get up too see who it is.

Dadu opens the brown gate and says to Ma that Tumpa is here. I like Tumpa mashi, I like her name. “Tumpa mashi, tumpa mashi,” I call her and she asks me if I have brushed my teeth and had my milk. I follow her as she begins to do the work. And she keeps on talking to me. “There is dirt there Diya, don’t go there.” I ask her to give me the broom and she says no. “tumi paarbena” she tells me. But I can do it. When she is not there I pick up the broom and begin to clean the floor. If anyone sees them they scold me. “Go and wash your hands,” Ma tells me when she sees me with the broom in my hand after she shouts at me. She tells me that it is for grown up people. I don’t like it when she scolds. When Tumpa mashi moves up the stairs I go too. I go into the verandah and call out to Meow Dida. Meow Dida stays in that big building in front. Her house has big black windows. When I call her she comes to one black window and tells me that she is cooking and is busy. She says that she will talk to me later. Meow Dida likes to play with m. I go to Meow Dida’s house when I come to Dadu’s house. There is a Mama in Meow Dida’s house too.

Tumpa mashi has a bag with her, when she comes into the house she keeps her bag on top of that big water tank. The water tank in Dadu’s house is very very big. I like to stand on that water tank and play, but Ma says I will fall. I used to sit with my Dida on the water tank. Dida tells me stories, she asked me about my Didun and kaku. She let me pluck flowers from the trees in front. She said that she used the flowers for her puja. I sat with her when she does the puja. She takes the flowers and put them on the gods. Then she lights a lamp. She folds her hands and says something. She tells me to fold my hands too. She puts some small round balls on the plate. I ask her what it is she, she says it if for the god. It is prasad she says. After her puja is over she gives them to me. The round white small balls are sweet. I eat a few and leave the others on the small plate.

We sit in the verandah and play. Dida sits and I stand. I can see so many cats around. That aunty has so many cats. She calls them – Fluffy, Brownie, Kitkat, Paku. One is white, one is black and brown, one is white and black. Once mama gave me a Kitkat. It was not a cat. It was a chocolate and was nice. The cats are very nice too. But Dida says they come into the house and drink up the milk. One of them threw up on the step and Dadu had to clean it all up. Every day after we finish eating Dida takes all the bones, some rice, she mixes it all in a small bowl. She goes outside and in that place where there are so many plants and puts it out. She says that cats will like some fish and rice. The cats do come and eat all the food she puts out there. When I go near them then they go away. I think they are afraid of me. But I want to play with them.

As I sit on the slab in the verandah and talk to my Dida I see two small cats under Puchki’s car. Puchki lives in the house below meow Dida. She is my Dida’s friend. I like her a lot. She calls me Puch- ki, Puch-ki. I call her Puchki too. Dida once told me not to call her like that. She is older to me so I should call her Puchki Dida. Ma also said that I should call her Puchki Dida. But I like to call her Puchki. Puchki has a car. And under that car every day I see cats. They play there, they sleep there. Dida says that it is nice and not hot there that is why the cats like sitting under the car. The car does not move. Puchki is at home. Ma says it is because of corona. Everyone is at home. When we go out we have to wear masks. I have three masks and I do not go out without wearing one. It is cold inside Dida’s house. Dida and I sit on the water tank after I have a bath. I play, and Dida talks to Meow dida. Sometimes she talks to Puchki. Mama is also at home. He is working so Ma tells me not to shout. I can also hear Puchki working. She is a teacher. Then we go in and eat. Ma tells me that I have to sleep in the afternoon. When it becomes dark we go to the big terrace and play. And Dida shows me the stars in the sky. She also shows me the moon. I know a poem about the moon. Ma had taught me and Dida asks me to say it. When it is very cold we don’t go to the terrace, Dida says we will fall sick. After some days I go back to my home. There is Baba and Didun there. Didun also tells me stories but there are no trees there and there is no water tank to sit and play on. The water tank is high up, on the terrace. We see stars on the terrace at night. Ma says we cannot go out. There is corona, so we play on the terrace sometimes. She says we will all sick if we go out. We need to wear a mask.

The phone rings so many times. Ma talks, Baba talks. They talk at home. I see Ma crying. Is she hungry? I have never seen her crying. What happened to Ma? I get up and go to her. When she sees me she stops crying. She picks me up and holds me. Baba goes out. His office is closed but he has to go. There is some important work. After some time Ma also goes. I stay with Didun. Ma comes back but Baba does not. I do not know when Baba came home. When I got up in the morning I saw Baba getting ready to go out. Ma’s face was red. Baba ate and left. I was with Ma. Didun came and helped me brush. She told me that she would tell me a new story. The story of a star.

“You have to be a good girl today Diya. Do not disturb your Ma.”

I shook my head. I ate my food, Didun gave me a bath. Ma was talking on the phone and crying. She cried so much that day. I went close to her and saw Didun calling me. Baba came home after Didun tucked me into bed. Today I would be sleeping with Didun. Didun makes so much of noise when she sleeps. I don’t like that. Dida also made that kind of noise, but it was not so loud. I could hear Ma and Baba talking.

Didun told me that story of a star. She said that sometimes when people go away, they go away very very far. They became stars. “Twinkle, twinkle lit-tel star” . Ma taught me to sing this. Puchki sings it sometimes too. Both of us sing it together. I don’t like it when baba goes away to office. I don’t like when kaku goes away. Baba comes back in the evening. Kaku comes sometimes with Mimi didi and kakima. Didun said that sometimes people go away and never come back. I told her that I don’t like that. “But Baba comes back?”

“That is different, Diya.”

I look at her. What is different?”

I don’t want to colour. I look at Didun and then I see Ma going into the kitchen. I want to ask her but I stop. Didun draws a cat, it is crooked. It is not like the cats in Dida’s compound. Both of us then begin to colour it.

One day Ma tells me that now Dida is a star. “How can Dida be a star?” “Dida is in that big house with Dadu and Mama.” Ma look at me and slowly says “Naa re, Dida chole geche”.

“Where did Dida go?”

“Not in this bright light.”

Ma became quiet, she got up and went into the bathroom. That evening Didun took me to the terrace. We saw so many stars. They looked so nice. They were so far away.

“Do you know which star she is?”

“That small one there.”

I could not understand which one. They were all small and so far.

After many many days we went to Dida’s house. But Dida was not there. I looked for her everywhere. Dida was not in that house. When I asked Ma, she said that she was now a star. Mama and Dadu said the same thing too. “Who do I play with? I want to play with dida.”

“I will play with you Diya” that was Meow Dida.

“My Dida is also a star, a little star.”

She said that in the evening we will see them all, the stars shining bright in the sky. I like that. I like to watch the stars when it is dark. I keep looking for my Dida.

Nishi Pulugurtha is an academic and writer based in Kolkata. Her publications include a monograph on Derozio (2010), a collection of essays on travel, Out in the Open (2019), an edited volume of essays on travel, Across and Beyond (2020), a volume of poems, The Real and the Unreal and Other Poems (2020), a collection of short stories, The Window Sill (2021), co-edited a volume of poems Voices and Vision: The First IPPL Anthology (2021). Her recent book is a volume of poems Raindrops on the Periwinkle published by Writers Workshop (2022). She is working on a book project that brings together recipes from the Telugu kitchen in Calcutta with tales of growing up in Calcutta/Kolkata. She also writes on Alzheimer’s Disease. An edited volume of critical essays titled Literary Representation of Pandemics, Epidemics and Pestilence is forthcoming from Routledge. 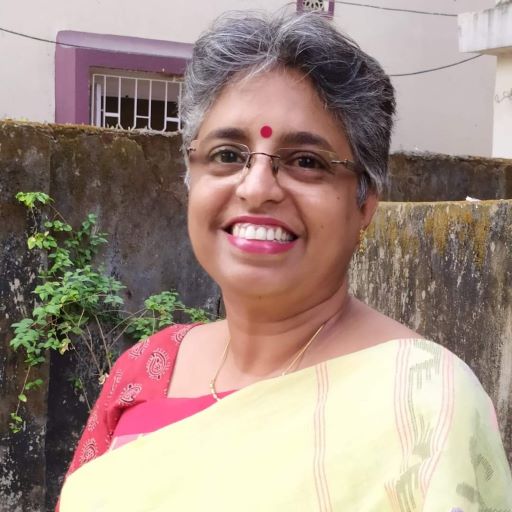