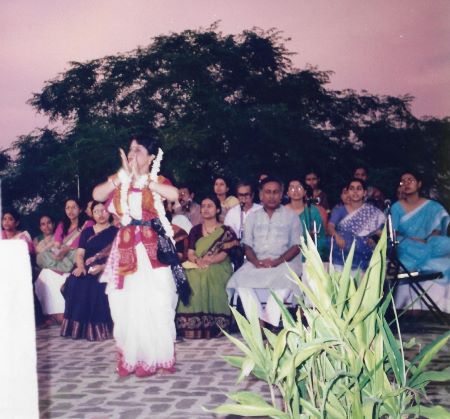 Caption: Borshamongol with Robigeetika and Mastermoshai; Bhaswati in green sari in the front; Mastermoshai right behind her, facing a microphone.

It’s October, but still uncomfortably muggy in Delhi. We’re crammed in a small car, five of us, including the driver, and frantically looking for a school in Civil Lines, one of the oldest areas in India’s capital city. The search gets long-winded as we have no GPS and directions from passersby keep leading us into lonely alleys. The school we’re looking for is the venue of a Durga Puja, the autumnal festival I’ve returned home for, from Canada, where I’ve been living for a decade now. By the time we finally find the school, it is way past lunch time, and my seven-year-old niece, who is with us, is hangry, a neologism I’ve heard friends in Canada use to describe someone whose anger is induced by hunger.

We take a customary look at the idol of Durga, then dash for the food court area the Kashmiri Gate – as this venue is called – Durga Puja is famous for. A, my niece, is led to the spot where steaming mutton biryani made with succulent, spiced goat meat, is being served on shiny aluminium foil plates. There are kebabs on offer as well, but the little girl isn’t interested in any of those items. She surveys the stalls and settles on samosas as a fresh batch of these deep-fried triangles arrives before her. I reach for my purse, but A stops me. She has her own money bag with some real money her parents gave her as festival allowance. For a plate of samosa that costs 20 rupees, A pulls out not two, but five ten-rupee bills – the entire amount she’s carrying – from her purse. She places all the five notes – 50 rupees on the table for the cashier. Everyone around her breaks into laughter. At seven, A knows her counting, but clearly, she doesn’t have enough experience in dealing with currency notes to know their value. The cashier kindly picks up two of the bills and asks her to keep the rest. After finishing her samosas, a less hangry A decides to cool off with an ice cream. She gives the vendor 20 rupees and he gives her a 5-rupee coin back after deducting the price of the chocolate cone she grabs.

Later as I try to guide A through counting currency, she tells me she’s got it all. “Look, you give someone money, they give you money back,” she insists, her knowledge fresh from the transaction with the ice cream seller. The child’s innocence humours and stuns me at the same time. To her, currency notes are the same as any other -- only less interesting -- thing you share with people to get something (including more of it) back. It’s of no greater value than the pencils or hair clips she exchanges with a friend. I refrain from giving her financial management lessons. This is her teaching moment, and for a change, I am the student.

It has been nearly three weeks since I’ve stopped going to work. A supervisor has been putting me on difficult shifts for weeks in a row. At first it seems innocuous, but when the pattern keeps repeating itself alongside favours being granted to other colleagues for no discernible reason, I stop going to work. I don’t have it in me to confront people and have internalized the idea of resigning as I spend time doing mostly nothing at home. I say mostly because almost every morning, I walk down our street, a fat book in hand, to the house of Mastermoshai, as I call Sudhir Chanda, the elderly gentleman who teaches me the songs of Rabindranath Tagore.

Mastermoshai is a professional Rabindrasangeet teacher. Professional only in the notional sense, considering his indifference, bordering on abhorrence, to money in exchange for his lessons. Through close to half a century that would see New Delhi, the city of Mastermoshai’s work and teaching, transform from a quasi-socialist to a neoliberal economy, plush with high-paying private sector jobs, redoubled spending power for the middle class and steady inflation, the teacher’s tuition fee – a laughable 30 rupees – remains unchanged. Even that amount he hardly cares for. One is free to drop into his class, named Robigeetika, and learn without paying a single rupee.

During one of his occasional visits to our house he learns about my absence from work and asks me to make better use of my time – by going to his house for music lessons. No money is mentioned. All he asks for is that I call him once before leaving the house to make sure he doesn’t have any other appointment that day. Mastermoshai specifies no time either – any time before noon is good for him. I lap up the offer. I need something that can fill up my heart like soil does a freshly-dug grave. Music seems like a safe and sanative layer at the time.

I’ve been to Mastermoshai’s house a few times before, but never for long enough to truly absorb the surroundings. Now, as an almost daily visitor, the setting of my learning is as much a draw for me as my teacher’s skill in training me in the peculiarities of rendering Tagore’s songs – enunciating each word clearly , paying attention to the poetic import of the lyrics, and above all, releasing the song with full-throated assurance. For me, just to listen to his khola-gawla, the stentorian depth from which his voice booms around his living – our class – room and spills over to his balcony through the open main door is enough reason to keep returning to the class. Mastermoshai is teaching me a new song – Aami tomaay jawto shuniyechhielm gaan. The opening line, which Tagore himself translated as I ask no reward for the songs I sang (to) you, is meant to be a devotional but it strikes me how it could well be Mastermoshai’s tag line as a teacher.

As I sit on a divan, Mastermoshai facing me from his chair, a harmonium atop a small table separating us, my eyes invariably travel to different corners of his house. A lifelong bachelor, my mentor seems to be unmindful about a lot of things besides money. His walls, not painted in years, are plastered with giant batik cloth paintings and wooden showpieces from Santiniketan, the Tagore-founded University where he studied chemistry as the main course and music on the sly. One corner of the room has a tall print of Tagore’s portrait; half of the divan where I sit is piled with books, by and on Tagore, mostly. The coffee table before me is also stacked with books and journals, layers of dust peeking from their base. Behind Mastermoshai’s chair is a walled bookshelf, stuffed to the gills, too. From where I sit, I can see his dining area leading to the inside rooms and find the dining table to have met the same fate as the other surfaces – by becoming a vessel for books of all weights and ages, some with their covers peeling off the spines. This is a home library unlike any I’ve seen or will see – disorganized, as if on purpose, emblematic of the very credo its owner lives by. One of acquiring books or anything for that matter, only for the real cause they serve, not as part of any home decor exercise.

Despite the sameness of the static elements of this room – the familiar batik painting, the portrait of Tagore, the book mountains – the classroom landscape changes every day for me. As Mastermoshai sings and I repeat the lines after him, visitors sometimes drop by. Like they are for me, his doors are open for them, too – friends, collaborators, students, neighbours. Mastermoshai pauses his teaching to bring water for his guests. On some days the class resumes immediately, on others, it takes a longer break and I become part – mostly as a wall ant – of intense discussions surrounding Tagore’s work, performance art, politics, the history of Santiniketan and anecdotes of his time spent with noted Tagoreans at the campus.

I eventually return to work. Find a new job. Get busy pursuing the ways of the world. I’m left with little time for music and for my teacher’s complimentary, one-on-one classes. Some more years and I move even further away as marriage transports me to a foreign land. In the gulf of years and miles, Mastermoshai loses his memory, then, one day the breath that helped his notes boom and soar for his nine decades on earth.

On some evenings, in a room in suburban Ontario, my home now, I practice the songs Mastermoshai taught me. I see what little A meant when she said “Look, you give someone money, they give you money back.”

Years ago, when I felt deceived and empty, a teacher filled my coffers with musical currency. Now, after his death, I’m trying to give him the songs back.

Tonight, I sit down to practice “Amaar shesh paraanir kori konthhe nileem gaan,” -- The penny of my final boat ride I bear as a song in my throat.

Bhaswati Ghosh writes and translates fiction, non-fiction and poetry. Her first book of fiction is 'Victory Colony, 1950'. Her first work of translation from Bengali into English, 'My Days with Ramkinkar Baij' won her the Charles Wallace (India) Trust Fellowship in translation. Bhaswati’s writing has appeared in several literary journals. She is currently working on a nonfiction book on New Delhi, India. Visit her at https://bhaswatighosh.com/ 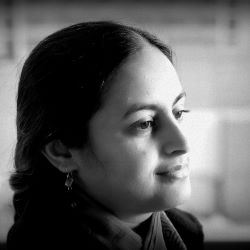