Saadat Hasan Manto migrated to the Western wing of the newly created state of Pakistan in January 1948 — five months after the Partition of the British India, which he consistently referred to as mulk ka batwara. This was the beginning of the last and painful phase of Manto’s life which he spent in Lahore. He had come from Bombay where he had been leading a hard but fruitful life for 12 years.

In the preface to his collection of short stories titled ‘Yazeed’, Manto mentioned that he considered Bombay his doosra watan — after Amritsar where he spent his boyhood and early youth — and called himself chalta-phirta Bambai. “Wherever I stay, I’ll make my own world.”

‘Yazeed’ — its preface was written on October 28, 1951 — was Manto’s eighth collection of stories since he landed in Lahore. In the early days of Pakistan when, in his own words, “people were struggling to occupy high places just the way they were getting houses and factories allotted to themselves,” he displayed a political commitment against all odds to use only his pen to earn a living for himself and his family, and to write only what he wanted.

And the odds that he faced were many and varied.

He was extremely disturbed by the batwara and the heinous communal riots that accompanied it. “Towards the mayhem — inqalab — that was unleashed as a result of the country’s partition I remained insolent for long, and still am, but later I recognised the dreadful reality, though in such a way that I did now allow pessimism to get to me.”

He was consistently writing against the wholesale repression that came to be the policy of the new state in its initial years — banning of a large number of newspapers and periodicals, jailing of writers and journalists, persecution of political dissent such as the Red Shirt movement in the then NWFP — under the all-purpose Public Safety Act (which he called the “Amrit Dhara Act”) — and the unwarranted space given to religious bigotry, jihadism and intrigue in the new country’s politics through instruments like the Objectives Resolution, war and xenophobia. Twice he had himself been tried — and acquitted — for obscenity in two of his stories related to the partition riots (He was to face one more of such trials — decided against him — before he finally left the world).

In this eloquent preface — which he gave the title Jaib-e kafan — Manto draws upon Ghalib’s masterful line: Hai dagh-e ishq zeenat-e jaib-e kafan hunuz. He writes: “I used to be recognised as a progressive, then all of a sudden I was branded a reactionary, and now the fatwa-givers are thinking again and are willing to acknowledge anew that I’m a progressive. And the government, which gives its own fatwa to overrule all fatwas, believes me to be a progressive, i.e. a surkha — a communist. From time to time it gets angry, accuses me of obscenity and tries me in courts. On the other hand, the same government advertises in its publications that S. H. Manto is a great writer of our country whose pen did not stop even in the past turbulent days. It frightens my sad heart to think that this fickle sarkar may happily pin a medal to my shroud, which will be an insult to my commitment — my dagh-e ishq.”

“All the anger in my heart has now turned into a feeling of melancholy. I feel extremely sad at what I have seen and what I am still seeing. My present life is full of hardships. I work day and night to barely earn enough to pay for my daily needs… But when I imagine that after my death my writings may be allowed into the radio and the libraries, and my stories may be given the status accorded to the poetry of the late Iqbal, I know that my soul will not find peace. That is why I am very satisfied with the treatment I have been receiving so far. May God save me from the termites that would lick my dried bones in my grave.”

In the light of the foregoing observations, I would like to briefly comment here on the efforts being made these days to misrepresent and misinterpret Manto’s writings. In his six critical essays (and a character sketch) that make up about half of the book Saadat Hasan Manto: Aik nai tabeer (a new interpretation), the famous Urdu critic Fateh Muhammad Malik (who finds it necessary to use the prefix ‘Professor’ even on the book’s cover) seems to have posthumously done what had been frightening Manto.

I have written in detail elsewhere how the textbook board in Sindh mutilated Manto’s story ‘Naya Qanoon’ while allowing it into the curriculum for class XII students. Malik’s ‘new interpretation’ is even more insidious; it seeks to present Manto as a subscriber to the jaundiced worldview that the interpreter himself holds — made up of excessive religiosity, hypocritical patriotism, sycophancy, hatred towards non-Muslims etc. — everything opposite of what Manto stands for.

It is futile to try and refute his arguments — there are practically none — as his unbelievable thesis is based on (i) theorising in the air and (ii) quoting Manto out of context. For example, he is capable of writing without hesitating for a moment that “Manto recognised himself in August 1947.” (p.9). In his effort to prove Manto a firm believer in the Two Nations Theory, he innocently presents the story Do qaumain (Two Nations) — of all things! The naughty story tells about Mukhtar and Sharda who want to run away and get married despite being from two different religious communities. The end of the story finds them arguing with each other on who should be converting to the other’s faith. Malik quotes from this argument but not the two final lines, in which Sharda says, “Take away your Islam,” and the narrator informs the reader: “Mukhtar took his Islam and went away.”

In the same way, the Professor quotes extensively — though carefully — from another of Manto’s finest stories ‘Akhri Salute’ to show Manto’s adherence to the state’s war policy. The story shows two soldiers from opposite armies — Rab Nawaz and Ram Singh — who are old friends as they have served together in the British Indian Army. Rab Nawaz “had to remind himself again and again that this time he was not fighting for salary, tracts of land and medals, but for his own homeland… When he thought about Kashmir, his mind stopped working altogether. Were Pakistani soldiers fighting for Kashmir or for Kashmir’s Muslims? If they were being made to fight for Kashmir’s Muslims, why hadn’t they been made to fight for the Muslims of Hyderabad and Junagadh? And if this war was a pure Islamic war, why were other Muslim countries of the world not participating in it? After thinking a lot, Rab Nawaz came to the conclusion that a soldier should not think about such fine things; his brain should be coarse, as only someone with a coarse brain can be a good soldier.”

Of course, Malik does not quote the last six sentences, as he needs to interpret Manto in his preferred way.

What Malik does to “Toba Tek Singh’ could have been funny had it not been terrible. He declares near the end of his ‘interpretation’ that (i) “Naturally, how could madmen understand the formation of Pakistan?” (p.83) and (ii) how can some people consider Toba Tek Singh’s “animal-like rootedness” as sanity and the behaviour of those leaving their ancestral homes for a “dreamland” as madness? (p.85) The good Professor expects too much not only of the wretched Sikh inmate of the madhouse but of his sympathizers as well. In his view, Toba Tek Singh should have behaved like other madmen and silently left for the correct side of the border!

To be sure, Malik’s voice is echoed from the other side by one Reoti Saran Sharma who has recently written an interesting critical essay titled ‘Muhajir Manto’. Sharma and Malik come to similar conclusions about the last phase of Manto’s life and writings — with the predictable difference that one man’s meat is the other man’s poison! There is no space — or need — to analyse the critical masterpiece from across the border here; suffice it to point out that in Sharma-ji’s view, Manto was actually trying to instigate Sikhs to demand Khalistan through the cunning madman Toba Tek Singh!

Would you like to hang Varis Alvi for commenting that people outside the madhouse portrayed by Manto in ‘Toba Tek Singh’ had become a bit soft in their heads?

Ajmal Kamal is an editor, translator, columnist, book reviewer, publisher and bookseller. He edits and publishes the Urdu literary quarterly Aaj from Karachi. 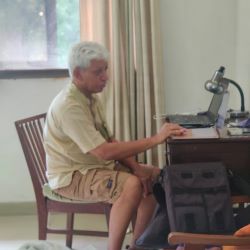