Silent with beings we're meant to follow,
on occasion asking a question,
looking up and about on mattress or mat,
footwear shucked off,
are conventions that mean keeping a distance,
not touching,
like prayers to those we were asked to plague
when in trouble, which we did and may still do
like many, like me, when affronted by death.

But if, in time,
we've come to believe they are in the mind,
those beings, the wounds they staunch without touching,
the fear, too, of dying in bits of ourselves,
in a litter of unanswered questions,
we may still have in mind what we carried from them,
those beings once believed in, and which,
though at a distance,
in momentary lapses of reason,
through hoops of unquenchable fire,
we leaped to and clasped to our hearts.

Treasure the corona you've made of contagion -
their kisses, their touch, if that's what you've done.
It could be a word - one, just one:
'forgiveness', 'compassion',
the crown we were not meant to wear alone
but pass from person to person.

Adil Jussawalla was born in Bombay in 1940. He is the author of six books of poems and Gulestan, a chapbook.. His third book, Trying to Say Goodbye(2011), was honoured with a Sahitya Akademi award in 2014. He was Tata Literature Live's poet laureate for 2021. He lives in Bombay. 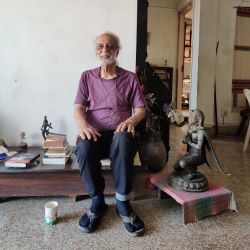