Leading to the Big Questions 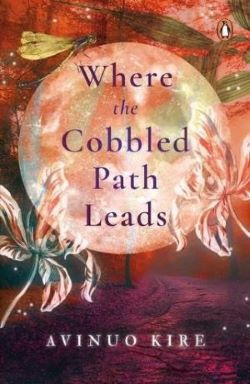 A Review by Namrata Pathak

Avinuo Kire’s Where the Cobbled Path Leads is anchored in a familiar terrain, Nagaland, a place that bore bruises and scars of a violent history. A landlocked state in the North East of India, Nagaland is mostly known for insurgency and allied counter insurgency movements, internecine warfare and ethnic conflicts that slowly creep into the writings that are produced here either knowingly or in a subconscious way. From Zapu Phizo’s radical ideas of statehood, the political assertions of Naga National Council to the imposition of the Armed Forces Special Powers Act in 1958, Nagaland saw turbulent transitions of varied kinds. With the enactment of the State of Nagaland Act in 1962 in the parliament of India and the subsequent dissolving of the interim body on 30th November 1963, the state of Nagaland was formed on 1st December 1963. In 1963 Nagaland got an independent identity and Kohima was declared as the state capital. The chequered political history of the land ridden with episodes of violence, ceasefires, negotiations at multiple levels are revisited by writers like Temsula Ao, Easterine Kire, Monalisa Changkija and Nini Lungalung in their powerful verses and stories. When I picked up Avinuo Kire’s debut novel, Where the Cobbled Path Leads, given the novel’s site of production, Nagaland I anticipated a retaliatory vein, the resistance of a patch of land called the periphery that was immersed in somber darkness and gory genocides for a while. I looked for the victim’s anguished cry, the sound and fury of a writer whose pen seeks to set right the untoward sagas of the past. I was, however, pleasantly surprised. Avinuo Kire not only gave us an incisive slice of contemporary Naga life, plump and ripe in its varied manifestations, but she also created an alchemy of a different kind by interweaving multiple life worlds and biospheres with Naga spirit tales and folklore. In the novel, the human and the non human meet to create a space of shared love and grief. The unknown dimension, call it a magical world of the spirits and other worldly creatures, gives a robust metaphorical potential to the narrative by expanding and building an interesting discourse of ‘what is sought beyond the ‘real’, the accepted and the normative’. Kire uncovers a vista of surprising encounters and discoveries by adding layers to perceptive reality. Not that the concept of ‘reality’ is in a tailspin and requires a thorough interrogation, but she successfully installs alternative window views in the novel through which we as readers could partake of a new way of life, a life lived in all its shades and exuberance. The fact that she took us to the other side of the known, seen and heard, made us ponder on the viability of blind, one-sided generalizing statements of life, on the efficacy of truths. Is not every moment a construct, not an ossified finality, but a cobbled path that sets us on a wandering journey into the edges of the forest? The vagabond soul walks past vales and dales, riverine villages, the misty hills resting on the panoramic sky, the bushes skirting the lonely path--- to seek what nourishment, to excavate what treasure trove? What are these wily, elusive ways of losing ourselves and finding ourselves?

The cobbled path that the eleven year old child protagonist Vime takes symbolically segments the journey of life into--- initiation, mobility, detour and the final destination, roughly the moment of self actualization. The child, Vime who was unable to come to terms with her mother’s untimely death, is seen to frequent a cobbled path near her house which leads to a forest. Her trails one day led her to a magnificent tree at the heart of a forest. She made this unusual discovery on a special day, on her mother's death anniversary when grief-ridden, the little girl set on a hunt for a less crowded, solitary spot just to tend to her broken heart. There she met Tei, a forest spirit, who, to Vime’s chagrin, does not fall under the confines of any gender. Tei is gender fluid, is neither masculine nor feminine. Vime’s subsequent disenchantment with her relatives and friends, her life in general after her mother’s departure, made her take an abrupt decision. She wanted to join her mother in the world of the spirits, primarily propelled by the fear that her father might remarry and her life would spiral down into a pit of uncertainties.

The resplendent tree with jutted out branches, a canopy of green foliages, and sturdy roots has a name, Kijubode. It is a recurrent image in Avinuo Kire’s Where the Cobbled Path Leads. Vime trips upon a stray tree root, falls down just to be cushioned in “a nest of vines at the foot of the tree”. Posited at the interstices between the human and spirit world, the tree serves as a portal, an entry point to other dimensions. Vime’s desires become coterminous with the tree, be it a constant craving to shun the fatal and morbid closures of life or to create a special communion with the world of the spirits, however inhabited by both good and bad entities. Interestingly, the tree creates an organic grammar of transgression as it blurs the borders between internal and external spaces, physical terrains and mental landscapes. The question is, what happens when one chooses to get out of the traps of a world that all the time pushes its limits? A conjunction of reality and fantasy, the tree opens up a non-restrictive, ever proliferating space, more inward than outward, for Vime to discover herself.

Vime’s decision to leave her earthly life to join her mother in the other world incurs new understandings and awakenings. A traveler in time, Vime enters and exits many labyrinthine realms in search of a moment of exactitude and clarity. This ostensible reformulation of her identity as an enunciator and trespasser makes her a self-aware author of her own life. Her passage into a different category of social membership is embodied in radical shifts in the narrative, which further installs interesting frameworks in the text.

Vime’s failure to adhere to the dichotomy of reality and utopia gives birth to a heady concoction of both. This spurs us to question the rationale behind categorization and systemic rigidity of boundaries of all kinds. Like Vime, Avinuo Kire plays with the taxonomies of existence, of order of things. There is a penchant for splicing up the strict patterns of life. Hence, the potent evocation of the cobbled path in the novel to which Vime always turns to. The path is a palpable freeway to the spectacle of nature, to an unbound space of communion and shared nourishment. However, with it we come across the genesis of a new Vime who finally accepts life as it is, with its sieved light, bitter sorrows, afflictions coupled with the woes of losing a dear one and the scares that death leaves behind. In the concluding part of the novel, a resourceful Vime acknowledges her role as a self-aware member of the place and community. The novel captures Vime’s growth through love and loss, grief and joy and most importantly, it maps the vitality of change and transformation that myriad phases of life demand, also, a willingness to embrace life in its totality.

Namrata Pathak teaches in the department of English, North-Eastern Hill University, Tura, Meghalaya. She has an MPhil and PhD from English and Foreign Languages University, Hyderabad. She has six books to her credit, and her latest are Indira Goswami: Margins and Beyond (Routledge, 2022) and A Reader on Arun Sarma (forthcoming from Sahitya Akademi, 2022). She has been a recipient of FCT-Ford Foundation Fellowship and UGC-Associateship by IIAS, Shimla. Her debut collection of poems, That’s How Mirai Eats a Pomegranate, was brought out in 2018 by Red River. Her poems and writings are included in the Sangam House Monsoon Issue: A Special on Poetry from North East, July, 2019, Outlook, Scroll.in, Bengaluru Review, Cafe Dissensus, Vayavya, Setu, Muse India to name a few and also anthologies forthcoming from Aleph and other publishing houses.` 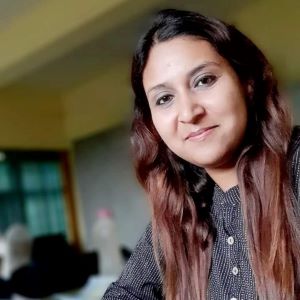