Vinita Agrawal's In the Language of Grief 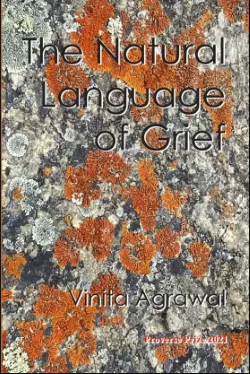 "A beautiful achievement. Her poems speak up for humanity, turning a compassionate lyric gaze on the physical landscapes and natural history of India, but also dire social injustice, and on domestic spaces like the private room of a lost grandmother, 'curling softly around her absence.' Above all we meet the 'traveller inside you' - and love: 'A door left ajar in the winds'. "

Vinita Agrawal’s Twilight Language takes its title from sandhya-bhasha, the coded language of the spiritual questors who have traversed India’s sacred geography across the centuries, the Siddhas, the Nathas, and the Pashupatas, who have spoken of the deep interrelationships between self and cosmos, between human individual and nature’s web of being, through allusion and allegory. Traditionally, therefore, sandhya-bhasha has also been sandhi-bhasha, the language of conjuncture, of communion, of bridging.

Agrawal’s pellucid, moving poems speak to both meanings of the word: they come to us at a time of gathering darkness, as our planetary future appears bleak and uncertain, placed in danger by our own delusions of species sovereignty, our brutal despoliation of the natural world, and our exploitation of our fellow sentient beings. And yet they remind us of the linkages between ourselves and animals, birds, terrain of diverse kinds, the breathing organism that is the earth. Achieving a throbbing unity of person, built form and natural environment in which division and its attendant fragmentation of consciousness ceases, Agrawal writes: “The winds turned me inside out/ I’m an ashlar floor of fallen leaves/ curling against the base of tree bark.” These finely wrought poems teach us how to redeem ourselves from isolation, through the enlargement of spirit and senses that follows, once we learn how to craft forms of solidarity with our neighbours, across classes, races, species and seasons, on this planet.

What does it mean to be still?
An unblinking eye of a revolving fish
A musical note flung high
pausing, stretching
before sliding into the ear.
You a dot
inside the circumference of stillness
jade in a forest.
Your silence, turquoise
sieving through mangled yellow noise.
You, absorbing the truth
that you‘
re reborn for your own sake
though you know full well
that there’ll never be enough time
to reach yourself.
You becoming your own goal.
You a sea beneath a gaunt moon
hardly moving.
Stillness, the only wings to know
what it’s like to inward fly.

I’m not what I was. Not anymore.
The winds turned me inside out
I’m an ashlar floor of fallen leaves
curling against the base of tree bark.
The more self-contained I become
the more intolerant I am of sunlight
—giver of warmth, keeper of life
enclosure of the burning heart.
Yesterday I closed-up completely
howled in solitude
as though the licence to be alone
was a license to cry, cause floods.
Screen, Zoom, Meet, Live
Won’t be not enough. Never.
Do you think
the liquid crystals of a screen
can afford touch?
I know well
how many leaves inhabit
the right angled branch of the Gulmohar
outside my window.
I‘ve counted them a zillion times.
(A day bitten blue with teeth marks.)

I chase scattered dots
that cannot be connected again.
(like fallen leaves)

I turn awkward
if I hug or kiss.
I’m a string without beads
a sky without stars.
I’m trying to preserve the look in your eyes.

Somewhere at the back of my vision
an intolerable mangled mess of flesh and blood,
hatching a new palette, flinchingred.

When father was on the ventilator
I saw time expand to eternity
whenever he regained consciousness and sought my eyes.

Recognition is the best gift.
Inside the white shroud of the hospital, his
consciousnesses was receding
quitting the warm walnut crevices out towards the
faultless space of skies.

I cowered under the thin, blanched gauze of hope
seeking acknowledgement one more time. My face
as sallow as the desert he came from.

Our togetherness butchered by the sawbone of death
The cleaver of time exposing marrows of longing
The muteness of life—changing moments getting to me.

So too the soundless slickness of knives.
Flesh removed by hand. The soaking, liming,
machining. Unhairing, degreasing, desalting.

The wind burying scents of terror beneath finger nails
the way the image of the napalm girl running in naked
agony
is buried in our collective conscience.

The breeze ruffles the pelt, fur and chamois wherever it’s
worn
like a blind grandfather feeling his children with his
hands.
Like it failed to save a precious thing.

The scent of roses baulks against the blood
oozing nick by nick
scar by scar.

Vinita Agrawal Author of four books of poetry, - Two Full Moons (Bombaykala Books), Words Not Spoken (Brown Critique), The Longest Pleasure (Finishing Line Press) and The Silk Of Hunger (AuthorsPress), Vinita is an award winning poet, editor, translator and curator. Joint Recipient of the Rabindranath Tagore Literary Prize 2018 and winner of the Gayatri GaMarsh Memorial Award for Literary Excellence, USA, 2015. She is Poetry Editor with Usawa Literary Review. Her work has been widely published and anthologised. Her poem won a prize for the Moon Anthology on the Moon by TallGrass Writers Guild, Chicago 2017. More recently her poem won a special mention in the Hawker Prize for best South Asian poetry. She has contributed a monthly column on Asian Poets on the literary blog of the Hamline university, Saint Paul, USA in 2016-17. In September 2020, she edited an anthology on climate change titled Open Your Eyes (pub. Hawakal). She judged the RLFPA poetry contest (International Prize) in 2016 and co judged the Asian Cha’s poetry contest on The Other Side ‘ in 2015. She is on the Advisory Board of the Tagore Literary Prize. She has curated literary events for PEN Mumbai. She can be reached at www.vinitawords.com. 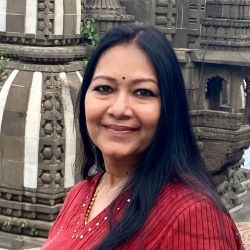