Temsula Ao was a friend, a warm human being blessed with a great sense of humour and generosity of spirit. I have many memories of shared laughter and conversation with her, but this is a tribute to the writer, to one of our major writers in English, our first Naga writer in English, one who wrote poetry and fiction and non-fiction prose with ease. Temsula Ao wrote the Northeast (how she hated this homogenisation of all tribes and lands of the region) into all our consciousness and created the space for literature from Northeastern states in our Indian literary canons.

Temsula Ao was born in 1945 in Jorhat, Assam. She was orphaned at early age, her mother dying just ten months after her father. Temsula Ao and her five siblings were split up -- the youngest ones went to the native village, the two eldest brothers continued their studies in Jorhat, and Temsula Ao was sent to Golaghat Mission Boarding School. Married off to a much older man before her Matriculation results were declared, all her subsequent education was after the birth of her children. It must be also noted that she brought up her children as a single mother. She did her BA from Fazl Ali College, Mokokchung, Nagaland and MA from Gauhati University, and then her Diploma in the Teaching of English from CIEFL (now EFLU) and joined the faculty of NEHU (North-Eastern Hill University, Shillong) in 1975 where she served till 2010. Her PhD was also from NEHU. I have heard and believe that she was a caring teacher and a great mentor.

While talking about her career, I must also add that she served as the Director of North East Zone Cultural Centre at Dimapur from 1992 to 1997. It was when she was a Fulbright Fellow at the University of Minnesota in 1985-86 that she realised the importance of folk literature, which motivated her to work on her book on the Ao-Naga Oral Tradition. Temsula Ao also served as the Chairperson of the Nagaland State Commission for Women, serving two terms in that capacity from 2012 to 2019. She was also a recipient of the Padma Shri award.

It was as a poet that I knew her first, because her first collection of poems, Songs that Tell, was published in 1988, when she was in her forties. When we were comparing notes, she told me that she could not remember when she began to write poetry. As one can see from the title of her very first collection of poems, Temsula Ao has saw herself as a lyricist. Poems are songs in oral cultures, and Temsula Ao saw herself as Naga woman-poet in search of tradition. Every collection of poetry written by her is a collection of songs – the other collections being Songs that Try to Say (1992), Songs of Many Moods (1995), Songs from Here and There (2003), Songs from the Other Life (2007), Book of Songs: Collected Poems 1988-2007 (2013), and Songs along the Way Home (2019).

Temsula Ao sings of her lands, about her state of mind, and about her community. She writes about the damage done to her people, their sense of uprootedness, and their wounds and pains. If the Christian missionaries in the colonial past had estranged her people from their past and their traditions and ways of life, the continuing violence and tensions had also eroded any semblance peace, of living in harmony with the land to which you belong, in a place which belongs to you:

Today,
I no longer know my hills,
The birdsong is gone,
Replaced by staccato
Of sophisticated weaponry
(“My Hills”)

This is a poem that is directly on the violence that has marked the lives of the people of the region in the last few decades, something you find more in her stories than in her poems.

In her poetry, Temsula Ao writes about her life and that of her community, about myths and cultural practices – thus being profoundly political without directly referring to the troubled violent history of the present. She used prose for the more direct comments on the impact of political violence. It is interesting to see how her poetry becomes part of her quest to recover and connect with the mythology of the community, to establish continuities with the past, even while she sings of her different emotions and moods, of her personal life, of love, loneliness, ageing and death. The individual finds herself only in her community, which takes her away from her loneliness into its traditional fold, giving her a sense of continuity and purpose.

Temsula Ao’s poems show you the woman struggling with her circumstances, a woman determined to go beyond, a woman expressing the angst of human lives, but a woman proud of being the ambassador of her community. Among her numerous poems on ageing and death, I would like to quote from two poems. In the first, she expresses the anxiety all of us share:

I fear
The dreaded fate
Of being rendered
Redundant
Before my formal death.
(“I Fear”)

In the second, which celebrates October, Temsula sees it as a magical month. The month when she was born is “Where I always/ Want to be.” This is the poem that ends with the lines all tributes to her must quote for they came true:

And when the time
Is ripe for me,
I wish to depart
With October in my heart.
(“October”)

It is in her collections of short stories that you see Temsula Ao’s writing squeeze your heart and hit you wherever you feel with stories about the violence that rocked her world. These Hills Called Home: Stories from the War Zone (2005), her first collection, disturbed my sleep for days. She wrote simply, almost dispassionately, about the war that had laid waste to her land and countless lies. It showed the actions of the State and its instruments with an unblinkered and unblinking vision. Laburnum for my Head (2009) continues this portrayal through depictions of ordinary lives impacted by this wretched conflict. Again, these are seemingly simply told but high impact stories. It is in her third collection, The Tombstone in my Garden: Stories from Nagaland (2022), that we get snapshots of Naga villages, myths, and practices.

Temsula Ao’s generosity of spirit extended to all. She had moved beyond conflict, which no one should forget, to forging connections, to understanding the compulsions of ordinary people sucked into this nightmare. In “The Epitaph”, ostensibly about the British cemetery at Kohima, Nagaland but actually about all soldiers dying and taking lives in distant lands, “Go home then” she implores

And write an epitaph
To the end of all
Mindless mayhem.

She expressed her poetic credo in “My Last Song” where can see her desire to script new endings even if she cannot script new beginnings, to be a sensitive recorder, to move people to action. Temsula Ao, then, is paradoxically the poet of hope, the one who won’t give up:

I will have sung
My last song
When I cease to be
Moved
By a maimed body
And a broken spirit.

She would have sung her last song when she no longer responded to “children’s laughter” or “women’s chatter” or to nature or hear “The appeal/Of the mute”. But she wouldn’t have been the person and the poet that she was if she didn’t add that it would be her end as a writer:

Temsula Ao once wrote that she had “… lived my life believing/ Story-telling was my proud legacy” (“The Old Story-Teller”). Without stories the people would lose their sense of self. The seven collections of poems and three collections of short stories, and the memoir, and the collection of Naga folk tales that she wrote and published will ensure people don’t forget their history, their identity. Temsula Ao did her duty by all of us, inclusive till the last. My salutes to you, my friend.

G.J.V. Prasad, formerly Professor of English at Jawaharlal Nehru University, is a poet, novelist, and translator. His teachings and research have focused on Indian English literature, modern drama and translation. 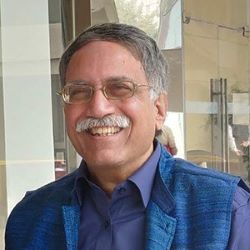