The body, the self, and the aftermath of rape 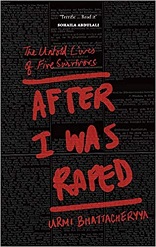 After I Was Raped by Urmi Bhattacheryya is one of those books with the power to save you. It possibly saved me. Before I received Urmi’s email, I was facing existential dread, was beyond exhausted from health issues, and almost on the verge of giving up my editorial and teaching responsibilities.

Earlier this year recounting my own experience of sexual violation became so traumatic that it unleashed such vomiting which could not be contained by medication and I had to be put on saline. It was only two years back, on antidepressants for the first time, that repressed, decades old trauma had begun resurfacing. It was only then that I realised that something evil had happened to me, my body, my self.

In this book I met survivors, as young as eight months. They or their parents raised the alarm, filed reports, fought, and are still fighting legal battles.

As they fought, relief flickered somewhere within me; they had pursued justice and in the afterglow of their redemption I would find salvation. Short-lived, this hope rapidly turned into bitter helplessness. The system would fail them. Over and over. Neighbours, friends, family would abandon them. The police would bully them. Medical professionals would violate them with the archaic two-finger test and a barrage of violating questions. The examining doctor had asked Ranjani in surprise, But why would he touch a Dalit like you? Ranjani had been menstruating at the time of the rape. The doctor became suspicious of the entire complaint - this would have deterred him. Ironically, Ranjani had thought the same as her rapist had lifted her saree.

To report rape first and foremost the survivor has to pass a collective agni-pariksha satisfyingly enough for the entire country’s satisfaction - that she did not deserve it, ask for it, nor enjoy it.

Next come the guilt and the shame, not just the survivors’ own, but those of her family members and well-wishers. In little Pia’s case after her body was torn open by rape as an eight month old infant, the doctors had to operate a new hole for faecal discharge. Her parents spent hours and hours cleaning and bandaging her. She spent hours and hours crying from unbearable pain in the night. These parents were then ostracised from their own family because the rapist had been a cousin. They were blamed by the wife and the mother of the rapist for creating this unpleasant business to usurp family property.

Somewhere between rage, pain, shame, helplessness, and the after effects of trauma, these survivors recreated their lives and relationships, often revolving around court hearings,. However, my namesake, Smita, who had been violently raped, gaslit and emotionally abused twice by her ‘boyfriend’, threatened with compromising photographs, could not find an anchor. Self-harm and extended mental health issues would mire her for years.

Trauma often disembodies the survivor, changing their relationship with their bodies. Nidhi’s tender vagina was torn, her cheek had been slashed by a blade, and she had been left naked in a pit to die. The rapist, a neighbour, Rahul bhaiya had lured her with a plate of chowmein. Later, in court, this fast food vendor would turn hostile. The rapist’s real name was not Rahul, and the defence alleged that Nidhi had accused a different person. How does a four year old process rape?

The book is written with a journalist’s precision, a storyteller’s brilliance, and a survivor’s empathy. Bhattacheryya’s love and admiration for these survivors’ courage is palpable on every page. But why is this courage necessary? This courage to stand before a system that looks you in the eye and not only fails you, but blames you, over and over, and say, I was violated. I want justice. The defence had accused Ranjani for accepting forty thousand rupees from her rapist. This crumpled her marriage. Her husband lost his trust in her. Furious, Ranjani attacked her assailant with a muddy slipper repeatedly asking, Did I accept money from you? Taken by surprise the rapist fled in fear. This mollified her husband.

Laws kick in after the crime to provide justice to survivors of murder, robbery, fraud. Physical violence is violation. Sexual violation is certainly violence. Committees have been formed, laws have been passed, there is POCSO, there are devoted public prosecutors such as Raj Kataria. There are community non profits such as Jan Sahas founded by Asif Shaikh. And yet we fail our sexual violence survivors. As a norm.

Urmi Bhattacheryya’s After I Was Raped is more than journalism, it is the author’s attempt at processing her own trauma, personal and witnessed, and a hand of solidarity to the reader. She does not offer solutions, she offers empathy. She says, These are real people, women and children, who live beyond the headlines, who deserve more than our collective ‘pity’. They are us - you and me. Let me tell you about them.

Bhattacheryya is an award winning journalist who has devoted her career to reporting sexual crimes. In this book we see the human behind the successful professional. She knows that rapes do not happen in a vacuum, or always to someone else. She brings to the reader the unending humiliating tedium of medico legal procedures that we do not find otherwise, or do not care upon finding. You see her constantly accompanying the survivors and their families, not as a reporter, but as a fellow human, a friend.

I must warn you - this is not entertainment. You will weep, get hysterical, hide this under all your other books. But then you will come back to see Pia gurgling, Parvati didi fighting for Nidhi. You would laugh, perhaps too loud in your relief, when Ranjani attacks her assailant with a muddied slipper. You will not want to give up hope, so you will pray for Smita to find peace. For Meera to be able to fight while shielding her grown up sons from the reality of her rape at the hands of her next door neighbour.

If I did not find the redemption I was looking for, but I met a tribe of survivors, not stereotypes of whores or angels, but real, flesh and blood, faltering, laughing, crying, fighting. I met people who care, committees that work towards creating a better system.

And Bhattacheryya through this book urges you to take a long hard look at the patriarchy we have internalised - I know I am looking at mine, questioning, discarding. This is might bring me liberation. I know I did not ask for it. I know I don’t deserve it. That I must continue to edit Usawa. That movies such as Ghar (1978) starring Rekha and Vinod Mehra, novels such as the Millennium Series by Steig Larsson, TV series such as The Valhalla Murders, and poetry anthologies such as Veils, Halos & Shackles - International Poetry on the Oppression and Empowerment of Women make a difference.

Smita Sahay is a writer and poet based in Mumbai, India. She is served as the Associate Editor of Veils, Halos & Shackles: International Poetry on the Oppression and Empowerment of Women, and is a Visiting Faculty at Whistling Woods International. Write to her at smita@usawa.in