War and Women: Breaking the Code of Silence

During her two-year stay in Croatia, Garima Srivastava tried to record in her diary the tales of casualties in the fragmentation of Yugoslavia and stumbled upon the multiple stories of rape and sexual abuse in the name of war. Deh Hi Desh is a collage of those narratives collected from Croatian women - an incisive and analytical compilation of memories. It unravels the horrors and helplessness of women during the Serbo-Croatian Bosnian conflict. As a new dimension in travel writing, this book is a document of the neglected reality of war rapes. The author has also delved deep into every aspect of displacement, from sex trafficking to rehabilitation and has comprehensively assessed post-war situation with sensitivity and precision. She has scrutinized the conflicting stance of international voluntary and feminist organizations on the issue as well. Deh Hi Desh brings to us the gendered repercussion of wars and preserves the ugly war memories that are prone to be lost to dark oblivion.

NC: First of all, I would like to congratulate you for writing on the difficult issue of sexual abuse of women during wars. Deh Hi Desh emerged as a by-product of your teaching assignment in Croatia. What made you take up this subject?

GS: I went to Croatia as part of an ICSSR programme in 2009, basically to teach at a university. Such a study or Deh Hi Desh was nowhere on my agenda. Before my visit, I had not even googled Croatia as the internet was not so integral to our lives back then. I was aware of the ethnic conflicts and wars in the nineties but somehow didn’t think of it much. A lot of well- meaning friends dropped hints to dissuade me but I was keen to see Europe and accepted the assignment with enthusiastic optimism. Looking back, I can say that I was unprepared for what I saw in Croatia. I was very lonely and struck a friendship with a travel agent. She would speak English with me and our conversations led me to the circumstances of women in war and its aftermath. Through her, I met a few women, including her sister, who opened up about their plight of sexual abuse and its lingering trauma in the context of the war that had ravaged their land for several years. I can say that this friend and her English practice was the entry point for this study. Later, I could not avert my eyes from what was unfolding before me and the heart- breaking journey seemed to draw me to itself.

NC: It is never easy to talk about sexual abuse and rape, especially for the sufferers to share their painful experiences. What was your strategy in collecting the stories?

GS: I had not thought of a strategy, so initially I went with the flow. The stories came to me in many ways and sometimes quite unexpectedly. I had fallen ill and the doctor would share Croatian Haikus with me. He would say, “Listen Dr. Garima” and recite an English translation of a Haiku verse. He shared that he had been married thrice and his wives lived in different cities. He narrated to me their experiences.

I talked to my students. Many of them opened up but a few seemed to distrust. Spending money on them, taking women out for coffee, or buying them drinks resulted in good conversations. At this point, it just seemed like I was sitting on a volcano waiting to erupt. Everyone around seemed to smile too much as if they were trying hard to hide their sadness.

Every morning, I would meet the cleaning lady at the University. We would wish each good morning. It would generally be just the two of us. I started paying her for talking to me. After a few days, she brought a young boy along who would interpret her words in English for me. Once I took up this study systematically, I also got an interpreter from the Embassy but no one for security when I had to go into unsafe areas.

NC: This must have been challenging both at the methodological as well as personal level…

GS: I was ridiculed for squandering away my money in this research. I was unwell and could even eat very little. I thought to myself what do I need so much money? It became difficult emotionally because of the difference in time zones. By the time I would be free in the evenings, it was already the middle of the night in India. The eerie stillness of the night seemed to gnaw at my loneliness. My heart had a sinking feeling but perhaps this made me empathetic and sensitive. I was also reminded of the personal story of someone very close to me who was a victim and suffered at the hands of her male partner. Her misery had been a reminder for me about the agony of women. I felt compelled, despite all odds, to dig deeper into the horrific nature of war crimes against women.

NC: Hannah Arendt gave us the term “the banality of evil” to express that Holocaust was part of everyday anti-Semitism. Did you find that rape in the Serbian war against Bosnia-Herzegovina and Croatia escaped public scrutiny because it was seen as routine? Or was it shame? What led to the culture of silence around this aspect of war?

GS: The notion of racial superiority was taken a step ahead by the Serb supremacists. To establish a greater Serbia, it was expected from the soldiers to rape and impregnate more and more women. More than routine, rape was the desired goal, and if it resulted in pregnancy, a cause for celebration. Another factor was that it was very difficult to prove incidents of rape and sexual assaults, hence the silence. Moreover, the state could not come up with a proper plan to rehabilitate the victims. A little over six hundred women were endowed with regular allowance but on the condition that they would produce a rape certificate every year. It means that they have to run pillar to post or bribe to get the certificate from a recognised authority while also re-living a trauma they want to desperately forget.

NC: What is the possibility of forgiveness for such crimes?

GS: There really has been no public apology from the Serbs even though it has been accepted that over 20,000 Bosnian women were victims of sexual abuse in this war. Earlier rape was considered just a mere by-product of crime, not a war crime. That is why I have portrayed personal stories that show how individual lives have been utterly devastated. Many thinkers, even feminists, feel that it is best to forgive. It has been urged that the victims should look ahead, forgiving the past, to visualise a happy future. Derrida wrote that forgiveness, in reality, is of the unforgivable, but that’s a call for the victims to make. We certainly should not whitewash anything.

NC: You navigate language with a very fine balance while writing about sexual abuse, and rape. How did you express with such care?

GS: I used to watch the news and squirmed uncomfortably when a rape incident would be sensationalised and horrific details were turned into juicy bits. That felt like dishonouring human bodies. Such twisting of perspective should not be done by anyone.

NC: How was the book received and do you think such a conversation can bring change?

GS: The book has been translated into English and Kannada so far. Punjabi, Bengali, and Oriya translations are also on the way. Even though the critics did not spare a single sentence for my work, ordinary readers interested in history, sociology, and theories of rape received it well. Their initiative to translate it, and hold discussions is taking the narratives of Deh Hi Desh forward. So, although in the circles of literary critics, awards and academia, the book has not been discussed much, it found its way into the hearts of ordinary readers. They have amplified the narratives which I do not consider to be insignificant in terms of creating awareness.

GS: Interestingly, Deh Hi Desh foregrounds Auschwitz - Ek Prem Katha. I should have written it earlier. I went to Poland to understand the conflict. So, historically Aushwitz – Ek Prem Katha takes you back. A lot of readers are not very receptive to diaries and travelogues, so this time around I have used literary imagination and turned it into a love story. Even though Auschwitz Ek Prem Katha is a novel, it has emerged out of serious research and my fieldwork. Whatever the genre – diary, travelogue, or novel – I can’t help but write about uncomfortable truths.

NC: Well, it is time someone did. Thank you so much

Garima Shrivastava  is a professor of Hindi at JNU. Her new novel Auschwitz — Ek Prem Katha would be out from Vani Prakashan soon. 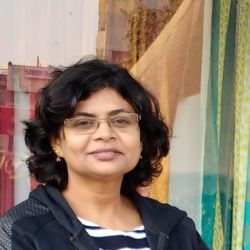 Dr Neekee Chaturvedi Dr Neekee Chaturvedi teaches History in University of Rajasthan, Jaipur. She is also serving as the Director of Centre for Museology and Conservation. She has worked extensively on early Buddhism. She has authored and edited several books that include 'A Historical and Cultural Study of Suttanipata', 'Conserving Buddhist Heritage', and 'Cultural Tourism and Bishnois of Rajasthan'. She was recipient of the prestigious International SAARC Research Grant. She is a professional theatre artist and has been part of many productions. 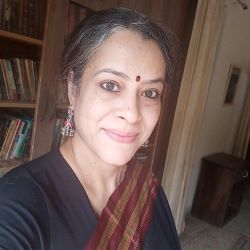