The days I think that I have lived long enough are also the days when I remember that there was a time when I wished I were immortal. The hopeful days of youth when life would seem to stretch out straight in time until a point where I could have the first glimpse of a rainbow; but only faintly. On those equally tumultuous days of emotional and financial struggle, I carried on, hoping that hereafter, life would only get better.

I was naïve. Afflicted with the superstitions of a youthful self.

In the later years when I arrived at the bitter conclusion that love did not exist, success is ephemeral and happiness is the persuasion ploy of the modern consumerist society; I conceded in the same vein, if I was ever to lose myself, it should be in love and happiness. My superstition about love was so strong, my faith in the idea of happiness so absolute in my youth, that in the later years I had to tiptoe to the other side of the balance to find equanimity.

Besides this contradiction that I doubted the existence of love, yet longed for it (the same with happiness), there was another skirmish going on inside my mind. The skirmish between my old naïve and new cynical selves. It was sometimes was so fierce that it had permanently brittled my mind. My memory, the bookkeeper of my failures, at the same time, was presented with an existential conundrum. On one hand, my new self could not bear the presence of my old. On the other, it could not exist without an origin. Erasing my old self and my old memories from consciousness meant being without the experience of continuous existence. The self that I call ‘I’ could not go on except holding onto the strains of my old memories.

There are many theories of self-acceptance in a situation like this. The theory of rough diamonds – for example. The unpolished stone that must go through deep cuts within itself, again and again, before sparkling. Therefore, pain is good, defeat is good, confusion is inevitable, or at least necessary for one to shine in the end.

Or in empirical terms, in which both the world and the self are chaotic beings, the advice is to play a game of average. By winning some and losing some, but living nonetheless and without regret. The important thing in this scenario is survival. To remain hopeful, and try not to be a perfectionist. What does not kill one will probably make him stronger.

Lately, I have found another way. It is not a particularly easy way. Neither is it morally superior. I will call it the Annie Ernaux way.

In this way, one views one’s past with neither derision nor nostalgia, but from the vantage point of the elder and wiser self. Clearly and hopelessly. With ex post facto intelligence and relief. In this way, there is no guilt in the viewer’s mind. Only the memory of his guilt. There is no shame in him, only the memory of shame.

In her twenty or so books – the documentation of her life (Annie Ernaux is a teacher, writer, lover, daughter, mother) — nothing, nothing is sacrosanct, nothing is graceful. No character in her books (based on her diaries and work schedule) is waiting for redemption. In the museum of her memories, she parades her imperfect self along with her parents, her lovers, her ex-husband, her two sons, friends, colleagues, her doctors, teachers, the contemporary writers she is envious of. This strange parade is serpentine-like time itself, covering her entire life, in which people and events appear as if they are from the still shots of a film montage—in which, John F Kennedy appears in his last carriage, Prince Charles hobnobs with the French writers in the Grand Palais, Simone De Beauvoir advises young women. And Charles De Gaulle saves the state. In the evening’s faint yellow light, indomitable Édith Piaf sings a lonely lover’s love songs. No one escapes her recall. Annie Ernaux’s memory cauldron boils a pungent broth made with her demented mother’s faeces, her dead father’s penis, her aborted foetus that would have been her first son. She is fearless in a way the last pagan priestess is fearless in a God-abiding country, as she summons her past, her inner shadow, her vain and jealous self, not giving two hoots about the prospect of inquisition.

Curiously, no one dares to put her on the stake. Curiously, her reputation only grows.

It is the fashion of the time in which we live. A time during which we have learned to withstand the cuts we receive from the blades of the prickly truths. We treat them as a minor distraction or worse, gossip. It is clear we have mastered the art of hearing the truth and ignoring it, as long as the price of it is not fatal. Annie Ernaux’s reminiscence about herself and her life choices makes us suddenly aware of our own fragile selves, our poor choices. We look at her both in doubt and amazement and find her still going on, still pursuing the profession of a teacher, still documenting her past and present. A sincere hope rises in our hearts that we too will go on, like Annie Ernaux, despite our shortcomings and terrible life choices. We too will live on, like her, easily and without fanfare. And we will not let our unacknowledged past cower us, not anymore, not be stooped under its weight. Rather, we will go on in simple acceptance of our memories, and that of the world. In that way, a self that is unobstructed will emerge. Our past and present will come together. Their union will bring us some peace.

If we have ever experienced a troubled love, we will not be bitter, not anymore, but live in sweet affection for our young and naïve selves. Who did what he did. Who felt what he felt. Even now, when the view is clear, and our thesis about life is concrete, we will remain fond of that younger lover, and carry him surreptitiously in our hearts along with the memories of our unrequited loves, feeling hopeful and hopeless at the same time.

But also, this sinister thought comes to my mind that we, the writers, too, playact. Who can deny the lure of creating an image of oneself? The way ‘Ernest Hemingway was a man’s man’ and ‘Emily Dickinson was a recluse and utterly devoted to her family’. Some facts, besides being lost with the passage of time, or being altered by the critics and researchers, are being quietly manufactured by the writers themselves to suit their interests. In an effort to create an image, and to pander to the demand of the readers, the writer, too, becomes a part of a broader fiction, a part of a charade. He pretends to be what he is not. His writing reflects an exaggerated version of his cherished self.

As an ink drop affects the clarity of the water, fiction and reality overlap in that writer’s life, muddying his inner and outer views. If he is not playing to the gallery, he is playing to himself. What he claims to be reality is not but a piece of bad fiction. And the fiction he writes is a poor reflection of his reality. Truth be told, Annie Ernaux has every excuse to claim that her books are the figments of her imagination. That human life, as we know it, is filled with people and events that are nasty, dirty, and mundane, and we all suppress our memories, as we hide our real thoughts to survive the world. We would have easily forgiven her.

But she does not deny that she is a fiction writer. In an acceptance of the unreliability of her memory or anyone’s memory, she consults books and Google searches to confirm the location and history of a place, and unfailingly reports her shortcomings to her readers. The chasm between what really happened and what she remembers is bridged by her fiction-writing self.

Therefore, I believe that Annie Ernaux is trying to capture the reality of her own existence through her writing. Her process of alternatingly looking outward and inward, and placing oneself against the backdrop of a particular period, and a geographical area like Yvetot, and then without pausing observing oneself and looking at the landscape, and its inhabitants and their culture; so peculiar and foreign; how minutely, how brazenly; and attaching her dreams, fantasies, and troubles, too, with it, in an unflinching look, like one knifes a cadaver in a morgue and steadfastly discovers the most complex and intimate parts of a body. She is steadfast and as ruthless as a morgue surgeon, but only more. Her description of reality is not of Proust’s (although she is fond of Proust). Her moments stretch like a rubber band and recur like a refrain in a song. Within a book. In book after book.

While reading her, I found the city of Rouen mentioned in her books several times, and I wondered: Is not this place a little familiar to me? Not that I have ever visited the city, but I have read a lot about it. Is it not where Joan of Arc was burned on the stake, and Madam Bovary went to see an opera, ‘Lucia di Lammermoor’? Vigdis Adelaïs, the protagonist of ‘The Convert’ was born? The French mathematician André Weil, while jailed in Rouen, proved the Riemann hypothesis partially.

I realized the hypertext nature of my memory and that of every human’s memory. This extraordinary connection that I have built, fetching words, pictures, and sounds from who knows how many books, films, Google searches, and conversations, after which Joan of Arc has come to live with Madam Bovary and André Weil. They have emerged from the darkness of my mind in a specific sequence and aroused a specific set of emotions. This particular sequence does not arise anywhere except within me. My memory that nests within my body, and is bound by my imagination, is a unique signature of my existence. Once documented, it will prove my distinctiveness to posterity when my body is gone. So it is for Annie Ernaux.

The proof of her existence is in the documents of her extraordinary memories — her bid for immortality? But I doubt that Annie Ernaux is aiming for immortality. Did she not say that she expected to die after writing her next book? Who wishes such a thing as immortality, so plain and tedious, while hiding in oneself such violence in the guise of a death wish? The unending curiosity that I projected upon her is perhaps nothing else but her nostalgia. She is gathering her past like a little girl who gathers flowers from a village path strewn with the flowers of fall. In her long life, she loved many, expected love, and was rebuffed and heartbroken. Now, she looks back and relives her past, earnestly hoping to find something or someone that will bring her some relief and some joy.

Perhaps she is making an album of the people whom she loved.

Arun Paria lives in Pune, India. His poems have been published in ‘The Bombay Literary Magazine’, ‘nether Quarterly’, and 'Yearbook of Indian Poetry in English 2021’; and are forthcoming in Sahitya Akademi’s ‘Indian Literature’. His short fiction has been published by ‘EKL Review’ and his creative non-fiction by ‘White Wall Review’ of Toronto Metropolitan University. He is the founder of the Pune Writers’ Group, a creative community, serving over 2000 writers. 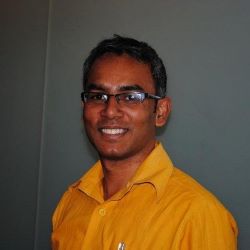